Bundesliga: Bayern Munich needed second-half goals by Robert Lewandowski, Corentin Tolisso and a thunderbolt of a volley from Alphonso Davies to rescue a point against Arminia Bielefeld. 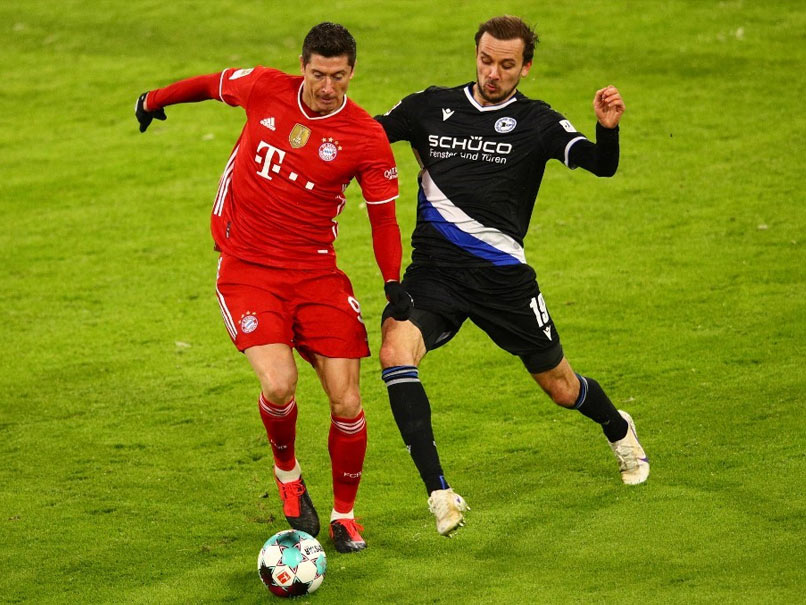 Robert Lewandowski claimed his 25th Bundesliga goal this season with a brilliant volley as Bayern Munich needed three second-half goals to salvage a 3-3 draw at home to strugglers Arminia Bielefeld in heavy snow on Monday. "It was a tough game, regardless of the weather, but we showed a fighting spirit, so a 3-3 draw is okay," said Bayern forward Eric Choupo-Moting. Despite the draw, Bayern are still five points clear at the top of the Bundesliga. However, four days after winning the Club World Cup final in Qatar, Bayern struggled on their Bundesliga return in Munich as Bielefeld raced into a 2-0 lead.

Bayern needed second-half goals by Lewandowski, Corentin Tolisso and a thunderbolt of a volley from Alphonso Davies to rescue a point.

"A lot of things came together in the first half," said Bayern coach Hansi Flick.

"But the team still showed their mentality again and we have to be satisfied with the point."

A wintry shower just before kick-off covered the Allianz Arena turf with thick snow and Bielefeld coped far better with the icy conditions.

Bielefeld are third from bottom, yet they dominated the world champions in the first-half.

The hosts fell behind when Dutch striker Michel Vlap scored just nine minutes into his Bundesliga debut as his brilliant turn wrong-footed the defence before he calmly slotted past Manuel Neuer.

The 23-year-old scored with his first shot in the Bundesliga.

Vlap struck again when he floated in a corner which centre-back Amos Pieper headed past Neuer on 37 minutes.

Bayern pulled a goal back three minutes after the break when Lewandowski chested the ball down and volleyed home with a brilliant finish -- it was his 25th goal in his 20th league game.

Tolisso struck with a header to pull it back to 3-2 with 57 minutes played before Davies equalised with a thunderbolt shot with 20 minutes left.

Bielefeld's Venezuelan forward Sergio Cordova had the ball in Bayern's net for the fourth time, but the goal was ruled offside 16 minutes from time.

Robert Lewandowski Corentin Tolisso Football
Get the latest updates on IPL Auction 2023 and check out  IPL 2023 and Live Cricket Score. Like us on Facebook or follow us on Twitter for more sports updates. You can also download the NDTV Cricket app for Android or iOS.