Brazilian international midfielder Lucas Moura said on Tuesday he is ready to embrace the "challenge" at an evolving Paris Saint-Germain. 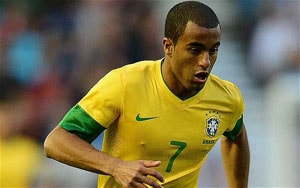 Brazilian international midfielder Lucas Moura said on Tuesday he is ready to embrace the "challenge" at an evolving Paris Saint-Germain.

Lucas, 20, signed from Sao Paulo in the summer on a four-and-a-half-year deal, PSG beating off competition from the likes of Manchester United and Real Madrid to snare a player hailed as one of the future guiding lights of the Brazilian team.

"It's a real challenge for me," said Lucas, who has scored three goals in 22 appearances for Brazil.

"PSG is in full evolution. (Sporting director) Leonardo helped me a lot to take the decision to sign when I could have continued with my former team in Brazil until season's end.

"It's a very important step in my career. There are stronger competitions in Europe. PSG has a long history with Brazilian players and I hope I'll be able to write a new page in this history."

PSG president Nasser al-Khelaifi added: "We're very happy to start the year with one of the world's best players."

Lucas, who has joined his new teammates at a training camp in Qatar, could make his debut in a friendly against Qatari champions Lekhwiya on Wednesday, four days before PSG's French Cup round-of-64 match against Arras in Calais on January 6.