With five days to go until the FIFA World Cup kickoff, Brazilian authorities are hard-pressed to resolve the wage dispute before more than 60,000 fans descend on the Corinthians Arena for Thursday's game between Brazil and Croatia. 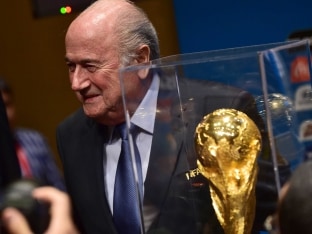 The work stoppage over wage demands by staff has caused massive traffic jams for the past three days in Sao Paulo as the city prepares to host the opening game.

With five days to go until kickoff, authorities are hard-pressed to resolve the dispute before more than 60,000 fans descend on the Corinthians Arena for Thursday's game between Brazil and Croatia.

The arena itself has been plagued by delays and construction workers were racing against the clock to finish it before the opening whistle, wiping seats, checking beams and installing wiring in two temporary stands.

The city's subway strike is the latest social upheaval to hit Brazil, where protesters angry at the World Cup's $11 billion bill have staged demonstrations.

Rousseff said the protests were orchestrated to derail her Workers Party (PT) before October 5 general elections.

Rousseff, a leftist political prisoner during the 1964-1985 military dictatorship, said that even in the days when the likes of Pele were leading Brazil to glory, "we did not confuse the World Cup with politics."

The president insists the money spent on the tournament will leave a legacy of modernized airports and transport infrastructure that will benefit Brazil for years to come.

But much of the other promised train and road infrastructure has been shelved, while five of the 12 stadiums have yet to be finished.

Rousseff's popularity has taken a hit, with an opinion poll showing that her support for the October election dropped to 34 percent in June from 37 percent in April.

She still led the pack of candidates, however, with her main rival, social democrat Aecio Neves, falling by one point to 19 percent.

In Sao Paulo, a court will rule Sunday on the subway strike's legality, but the union warned it could continue the work stoppage even if its loses the legal battle.

Workers have reduced an initial claim for a 16.5 percent wage hike to 12.2, but employers are offering only 8.7 percent.

The subway standoff led to a clash Friday between picketing strikers and police inside a metro station, with authorities swinging truncheons and firing tear gas to disperse the protesters.

Although this year's marches have been smaller, Brazil's 2002 World Cup-winning captain Cafu said he feared more large-scale unrest was in the offing.

"The political situation is boiling over -- and I wish the talk could be of football. But that's currently not possible given all the political arguments," he said.

"They should stop the strike. It's hurting workers," said Ademar Francisco do Santo, 31, a doorman wearing Brazil's yellow team jersey whose commute was two hours longer than usual.

"It's not the Cup that's messing up the country. It's been like this since Don Pedro arrived," he said, referring to Portuguese explorer Pedro Alvares Cabral, who discovered Brazil in 1500. "Someone is always robbing the country."

Three of the five subway lines were partially operating, while trains were not arriving at the Corinthians Arena.

Subway union official Rogerio Malaquias told AFP that up to 95 percent of employees support the strike.

"As long as there is momentum, the movement will continue and could continue until the World Cup," Malaquias warned.