Watch: Brazil Legend Pele Scored His 1000th Goal On This Day, 50 Years Ago

The revered Brazil striker Pele scored his 1,000th goal on November 19, 1969 at Rio de Janeiro's Maracana stadium in a match between his beloved Santos and local outfit Vasco de Gama. 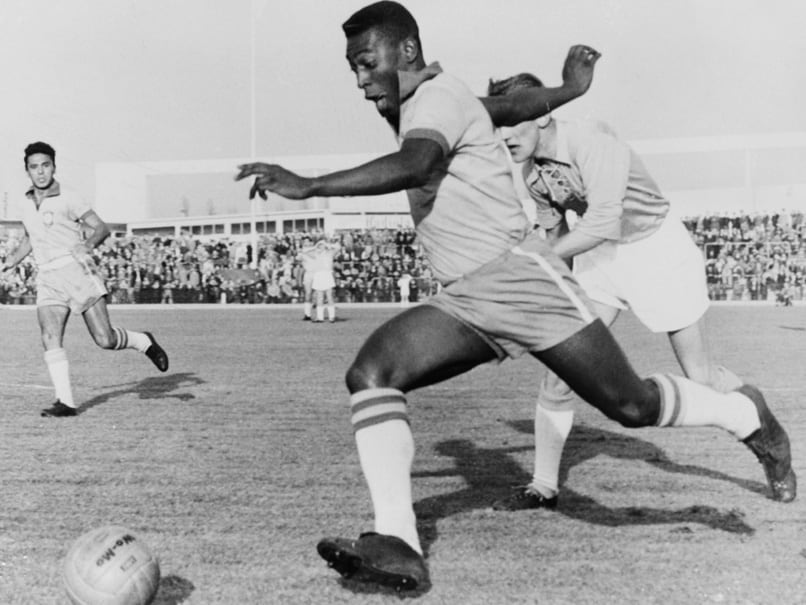 The revered Brazil striker Pele scored his 1,000th goal on November 19, 1969 at Rio de Janeiro's Maracana stadium in a match between his beloved Santos and local outfit Vasco de Gama, whose vast ranks of fans gave the iconic No. 10 a standing ovation. That goal half a century ago was a beautifully converted penalty which escaped the grasp of the Vasco goalkeeper, sparking a pitch invasion by the press and culminating in Pele being paraded shoulder-high around the historic stadium by his teammates. Swarms of photographers and journalists had been poised pitchside for the moment.

The penalty decision was a doubtful one. Pele recently joked that with today's VAR system it would likely have been refused.

The goal has etched itself into the Brazilian national consciousness, a deft finish into the bottom right corner, with Pele running to collect the ball and kissing it as he turned away.

Some 65,157 fans had bought tickets for the Brazilian league match in which Pele scored the landmark goal and which Santos went on to win 2-1. Folklore says there were 80,000 in the stands.

Even if today there is debate over the exact number of his goals that should count in an official tally, there is no debate over Pele's sublime goal-scoring talent and the place the now 79-year-old holds in the public imagination.

"I don't need a party to celebrate this," Pele said after the goal. "For me it is much more important to help poor children and those in need, I'm thinking above all of the kind of Christmas those people are going to spend."

Years later, Pele would tell an anecdote about street children in Santos and how the message from his 1,000th goal was for them.

"A few days before the goal I was in Santos and I saw some kids trying to steal cars and I said: 'Hey boys what are you doing?' They tried to justify it by saying they would only target cars from Sao Paulo, so I told them they shouldn't rob anyone at all. That was the message from my 1,000th goal," Pele said.

Pele also says he held off from scoring his 1,000th goal so he could achieve the feat on the big stage at the Maracana.

In a hastily arranged friendly against Botofogo two weeks earlier he scored twice to take his tally to 999.

Then, on November 16, Santos played in Salvador against Bahia.

"I don't want to annoy the Baianos, but I wanted the goal to be in an official game, so I stopped shooting at goal in that game. I was afraid the players would just let it in," he said.

- A thousand goals with Santos -

Many studies have been done on whether or not the November 19 goal was indeed his 1,000th and there are differences of opinion.

Whatever the count Pele, and his entourage, have settled on a final unofficial tally of 1,281 goals in 1,363 games, though that includes the many friendlies Santos played.

There is also his 1,000th goal in a Santos shirt which came against Universidad de Mexico in a friendly in Chicago July 2, 1972.

Czech striker Josef Bican stands top with 805 goals in 530 games in a career interrupted by World War II. Romario, who helped Brazil to the 1994 World Cup, is second on 772 goals from 994.

Breathing down Pele's neck are current stars Cristiano Ronaldo on 724 from 1,018 games and Lionel Messi on 708 from 890.

Brazil Pele Football
Get the latest updates on IPL 2021, check out the IPL 2021 Schedule and Indian Premier League Live Score . Like us on Facebook or follow us on Twitter for more sports updates. You can also download the NDTV Cricket app for Android or iOS.