Best yet to come from Balotelli: Mancini

Roberto Mancini believes Manchester City are still to see the best from Mario Balotelli, despite seeing his striker go some way to answering his calls with an eye-catching performance in the 3-0 victory over Aston Villa on Wednesday in their FA Cup fifth round clash. 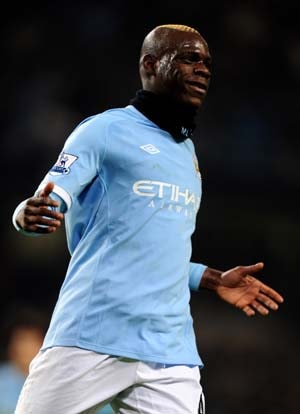 Roberto Mancini believes Manchester City are still to see the best from Mario Balotelli, despite seeing his striker go some way to answering his calls with an eye-catching performance in the 3-0 victory over Aston Villa on Wednesday in their FA Cup fifth round clash.

The Manchester City manager questioned the Italian striker's work-rate and demanded he do more ahead of the match.

Balotelli, who cost £24million, has been struggling with a knee problem and had threatened to earn more yellow cards than goals since his arrival from Inter Milan.

But after his fine finish took him into double figures for the season, Mancini said: "Mario played well and scored a fantastic goal against Villa.

"He's improving all the time, but it's hard as he has just returned from injury. But I know there's still more to come from him."

Manchester City have been fighting on three fronts with the FA Cup joining the Europa League and the Premier League in their chase for silverware.

It's been 25 years since their last trophy but they took a step closer to achieving that aim as goals from Yaya Toure, Balotelli and David Silva, all summer signings, saw off a weakened Aston Villa side.

Manchester City will now face Reading, the Championship side who pulled off a big upset by beating Everton.

And although it appears that the Premier League title is unlikely, with Mancini writing off his team's chances, the FA Cup quarter-final is the least of his priorities.

Securing a place in next season's Champions League with a top-four finish has shot to the top of the Italian coach's list of priorities.

"Against Villa they (Villa) had the option to change.

"I don't have that option at this moment. We have been playing a lot of games. I have some tired players.

"Of course I'm pleased to get through.

"But first we need to get fourth position.

"We have been between first and fourth for 28 games. Now is the time for key games before that."

While Manchester City were given a helping hand by Villa fielding a weakened team, manager Gerrard Houllier defended his team selection.

The Frenchman, who will come under fire from his own supporters desperate for success having seen neighbours Birmingham City just win the League Cup, believes securing their Premier League status should remain their priority.

Despite an upturn in fortunes that sees them sit comfortably in mid-table, Houllier refused to dismiss his side's chances of being dragged back into a relegation fight.

"They (his players in the match) are all internationals and they are all doing well. They are proven top-class players who I picked.

"If I had to do it, I'd do it again. We have an important game against Bolton. We can still face a relegation fight, definitely."

Comments
Topics mentioned in this article
Football Inter Milan Manchester City Bolton Wanderers Manchester United Arsenal Mario Balotelli Aston Villa
Get the latest updates on ICC T20 Worldcup 2022 and CWG 2022 check out the Schedule, Live Score and Medals Tally. Like us on Facebook or follow us on Twitter for more sports updates. You can also download the NDTV Cricket app for Android or iOS.