Belarus champions BATE Borisov have made a strong start to their Champions League campaign, topping Group F with a maximum of six points, but their success has come as no surprise to club president Anatoly Kapsky. 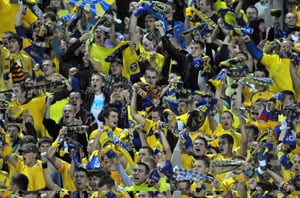 Belarus champions BATE Borisov have made a strong start to their Champions League campaign, topping Group F with a maximum of six points, but their success has come as no surprise to club president Anatoly Kapsky.

The charismatic 46-year-old Kapsky said that BATE had profited from the hard work put in by a group of like-minded people bent on step by step improving the club's standing in Eurfope.

"Our win should not be taken as a complete sensation," Kapsky said after BATE beat 3-1 German giants Bayern Munich on Tuesday.

"Our coaches and footballers are true professionals and patriots. Our personnel and players all love football and love their motherland.

"Our starting line-up consists of 10 Belarus players and just one foreigner. It's a very rare case in European football. I think it's very important when the players understand for whom they are playing and who support them."

The success achieved by BATE this season is a source of pride for football fans in the east European country, especially as they have done it on a tight budget of eight million euros compared to the 280-million-euro annual budget enjoyed by Russian champions Zenit.

BATE players have so far taken their success in their stride.

"We have absolutely no reason to rest on our laurels," said BATE midfielder Alexander Pavlov.

"Yes, we won two matches and top our group, but any kind of slackness may cost us this lead. That's why we should come into every match with just one aim - to win it."

This year Kapsky managed to bring back to BATE the club's most famous player -- midfielder Alexander Hleb. His experience of playing with European giants Arsenal and Barcelona soon established him as BATE new leader.

"When we signed the contract with Hleb some people warned me that a player with such a great charisma can easily spoil the chemistry in the dressing room," BATE chief coach Viktor Goncharenko said.

"However, everything went on in the best possible way. Hleb has united the entire team around himself and become a true team leader. And when the entire team have a single aim it's much easier to achieve things."

Goncharenko also said that his players were set to extend their winning ways in the Champions League.

"Those wins have seriously boosted our self-confidence," he said. "I feel that my team are capable of playing classy football while the players are ready for serious achievements.

"But neither myself nor my players want to anticipate the course of events. In these two matches Lady Luck was on our side as we managed to convert our chances into goals and won," he added.

"But in the future we need just to be ready to play at our top in every single match. Our next rivals Valencia are a strong and experienced club. But we'll do our best to remain in a positive mood after the match against them."

Comments
Topics mentioned in this article
Football BATE
Get the latest updates on ICC T20 Worldcup 2022, check out the Schedule and Live Score. Like us on Facebook or follow us on Twitter for more sports updates. You can also download the NDTV Cricket app for Android or iOS.