Milan, crowned European champions seven times, had failed to beat the four-times winners in the Champions League since a 2-0 win at the Camp Nou in 2000 and had also exited the competition last season and in 2006 after defeats to the Spaniards. 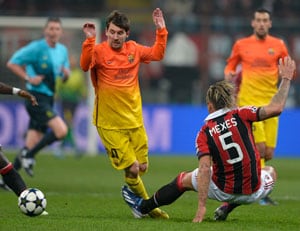 Barcelona assistant coach Jordi Roura hit out at the state of the pitch after his side were left staring at an early Champions League exit following a shock 2-0 reverse to AC Milan on Wednesday.

Ghanaians Kevin-Prince Boateng and Sulley Muntari scored one apiece in a lively second half as the hosts, impressive defensively throughout, stunned the Catalans in their last 16, first leg, at the San Siro.

Roura, standing in for Tito Vilanova while the coach undergoes cancer treatment in New York, admitted the Blaugrana had simply not done enough.

But the 45-year-old Spaniard, whose own playing career was virtually ended at the San Siro in 1989 when he suffered a serious knee injury while playing for Barcelona, also claimed the pitch was unfit for a Champions League game.

"It's bad to lose 2-0 but we're convinced that when we'll be playing at home in front of our own fans on a pitch that is fit for this competition, we will overcome this setback," said Roura.

For Massimiliano Allegri the win -- Milan's first over Barca in the competition since 2000 -- was more than welcome.

The Rossoneri coach was lucky to avoid the sack after a disastrous start to the Serie A season, but has overseen a significant improvement since then.

"It's a great and deserved win for us," said Allegri.

"We worked hard as a club to prepare for this match and the lads did a great job.

"We could have perhaps done better with the chances we had in the first half, and finished the game with a third goal, but we never believed we would be going to the Nou Camp with a 2-0 advantage."

Milan, crowned European champions seven times, had failed to beat the four-times winners in the Champions League since a 2-0 win at the Camp Nou in 2000 and had also exited the competition last season and in 2006 after defeats to the Spaniards.

But after a promising first-half display was taken up a level in the second period, the bulk of the 75,000 fans in attendance were given reason to believe their team can go on to qualify for the quarter-finals.

Although born in Germany, Boateng played for Ghana in the 2010 World Cup and made the stadium erupt in the 57th minute with a superb opener.

Striker Stephan El Shaarawy, who spurned two goalscoring chances in the first half, won a free-kick 30 metres out after a foul by Dani Alves.

Riccardo Montolivo's shot appeared to bounce off the hand of Cristian Zapata before falling fortuitously for Boateng, who beat Victor Valdes with a superb strike from the edge of the area.

Barcelona were showing little threat, while Milan continued to grow in confidence.

An Andres Iniesta effort that from range that shaved the far post was as close as the visitors came to scoring, but soon after that they fell further behind.

Nine minutes from time, substitute M'Baye Niang and El Shaarawy combined, with the latter's fine flick setting up Muntari to lash in the second goal with a superb angled strike.

"Tonight we played just as we'd hoped to play - we closed down space and tried to hit them on the counter-attack," said Montolivo.

"But Barcelona were formidable. I expect the second leg to be a real battle," he added, with a nod towards the March 12 return.