Pep Guardiola's Bayern start the weekend 11 points clear and could still break last season's record when they claimed the title with seven games to spare. 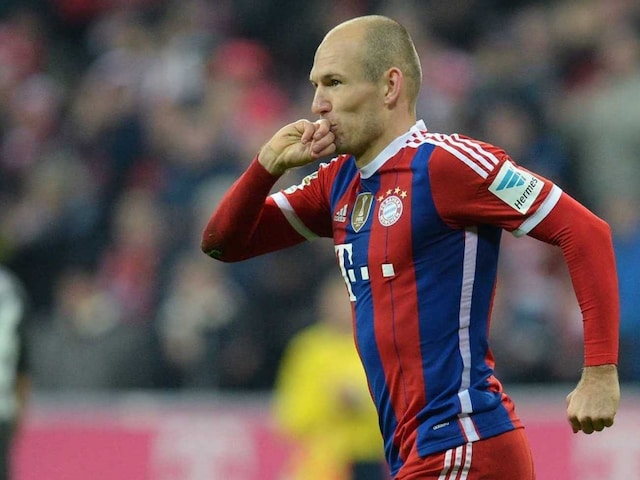 Bayern Munich hope to welcome back wingers Arjen Robben and Franck Ribery for Sunday's clash at home to Borussia Moenchengladbach as they look to edge closer to the Bundesliga title.

Pep Guardiola's Bayern start the weekend 11 points clear and could still break last season's record when they claimed the title with seven games to spare.

With 17 league goals in 20 games this season, Robben is battling Frankfurt's Alex Meier to become the Bundesliga's top scorer but the flying Dutchman is battling to overcome a trapped nerve that saw him miss last Saturday's 4-0 rout of Werder Bremen.

Robben took part in training this week, as did left winger Franck Ribery, who also sat out the Bremen victory with an ankle injury.

However, with Poland striker Robert Lewandowski pillaging six goals in his last five league games and on 13 for the season, the champions would still have plenty of firepower without the pair.

Bayern will be without suspended centre-back Medhi Benatia, whose yellow card at Bremen was his fifth of the season, carrying with it an automatic suspension.

Bayern captain Philipp Lahm is set for another place on the bench having made his return from injury at Bremen.

Gladbach face an uphill task to take points off their hosts with Bayern unbeaten at home this season after 11 wins and a draw.

Fresh from their midweek Champions League exit, tenth-placed Borussia Dortmund are hunting their first win in four games when they travel to Hanover 96, who are 13th.

Germany defender Marcel Schmelzer is an injury doubt having picked up a knock in their 3-0 last 16 defeat to Juventus, which sealed a 5-1 aggregate defeat, but defensive midfielder Nuri Sahin is definitely out with a leg injury.

"Our main priority is the league now, although that doesn't mean that we don't want to progress in the German Cup," said Borussia coach Jurgen Klopp.

His side have improved in the league since the turn of the year having started February bottom of the table following a dire set of results.

Hanover coach Tayfun Korkut is under pressure as his side have won just one of their last 10 games.

Fifth-placed Schalke have a chance to improve their Champions League chances for next season when they host fourth-placed Bayer Leverkusen on Saturday night with just three points separating the teams.

"I think you can describe this game as a 'six-pointer'," said Schalke coach Roberto di Matteo.

"We're playing at home and are confident of getting a good result."

The 44-year-old is set to keep teenage goalkeeper Timon Wellenreuther between the posts with first-choice stopper Ralf Faehrmann working his way back from injury after picking up a cruciate knee ligament strain in January.

Both teams exited the Champions League at the last 16 stage with Schalke going out 5-4 to Real Madrid on aggregate despite a stunning 4-3 win in Spain just over ten days ago.

Bayer are still licking their wounds after bowing out on a penalty shoot-out at Atletico Madrid on Tuesday despite winning the first leg in Leverkusen.

Fixtures (All fixtures 1430 GMT unless stated)

Comments
Topics mentioned in this article
Bayern Munchen Arjen Robben Franck Ribery Football
Get the latest Cricket news, check out the India cricket schedule, Cricket live score . Like us on Facebook or follow us on Twitter for more sports updates. You can also download the NDTV Cricket app for Android or iOS.