Bayern Munich on top in Germany after Borussia Dortmund rout

Former Dortmund hero Mario Goetze came off the bench and produced a super shot to give Bayern the lead on 66 minutes before Arjen Robben and Thomas Mueller added to the 3-0 rout in the final five minutes of Saturday's German Clasico. 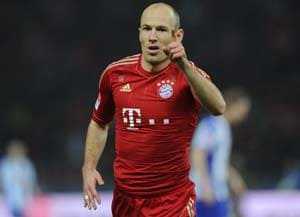 Former Dortmund hero Mario Goetze came off the bench and produced a super shot to give Bayern the lead on 66 minutes before Arjen Robben and Thomas Mueller added to the 3-0 rout in the final five minutes of Saturday's German Clasico.

It was Bayern's first Bundesliga win over Dortmund in seven attempts and extended Munich's record unbeaten run in the German league to 38 matches in a repeat of May's Champions League final.

The result at Dortmund's Westfalenstadion left Bayern four points clear of Bayer Leverkusen, who replaced Dortmund in second place, while Pep Guardiola's Munich are an ominous seven points ahead of Borussia.

"We are very happy because we won against the best counter-attacking team in the world," said Bayern coach Pep Guardiola.

"In the first 15 minutes we played very well, but didn't do so well at the end of the first-half.

"We were clearly better in the second half, especially with Thiago, Mario Goetze, Toni Kroos and Philipp Lahm."

Dortmund came into the game having suffered a double injury blow after both Germany defenders Mats Hummels and Marcel Schmelzer were ruled out with injury on Wednesday.

Bayern, in contrast were missing only France winger Franck Ribery from their first-choice line-up and Guardiola could bring Goetze and Spain star Thiago Alcantara off the bench.

Defending champions Bayern are at CSKA Moscow in the Champions League on Wednesday, but have already booked their place in the knock-out stages.

Dortmund had their chances, with seven shots on goal compared to Bayern's 10, but Marco Reus and Henrikh Mkhitaryan wasted clear chances while Bayern made theirs count.

"It was still 1-0 up until the 85th minute, it looks like a decisive win, but Dortmund had their chances.

"We put the space we had to good effect and perhaps deserved to win.

"As a young boy, you dream of playing in stadiums like this."

Dortmund have no time to lick their wounds with Napoli next up on Tuesday in a game they must win to keep alive their dreams of reaching the Champions League's knock-out stages and are third in their group behind leaders Arsenal and Napoli.

"Bayern changed their game in the second half and hit a few long balls, they were patient," said Dortmund coach Juergen Klopp.

"I believe that up until the 1-0, we had big chances, you have to put those away if you want to get back into a game like this."

Dortmund have had a few tough weeks, losing to Arsenal at home in the Champions League and this was their third straight defeat after also losing at Wolfsburg in the Bundesliga.

"Games are decided by goals - and at the moment we're not scoring the crucial ones," said Dortmund captain Roman Weidenfeller.

"The amount we lost by is ultimately irrelevant.

"It's a bitter defeat, as we played a good game over nearly 80 minutes and have nothing to show for it."

Comments
Topics mentioned in this article
Football Bayern Munchen Borussia Dortmund Shinji Okazaki
Get the latest updates on ICC T20 Worldcup 2022 and CWG 2022 check out the Schedule, Live Score and Medals Tally. Like us on Facebook or follow us on Twitter for more sports updates. You can also download the NDTV Cricket app for Android or iOS.