Bayern Munich is more important than France for Franck Ribery

Winger Franck Ribery has said his Bundesliga club Bayern Munich is more important to him than the French national team ahead of Wednesday's international friendly against Italy. 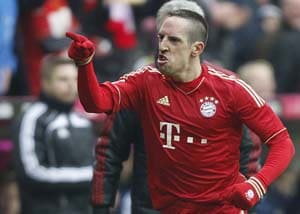 Winger Franck Ribery has said his Bundesliga club Bayern Munich is more important to him than the French national team ahead of Wednesday's international friendly against Italy.

The 29-year-old is set to make his 70th appearance for Les Bleus on Wednesday in Parma, Italy, having been selected in Didier Deschamps squad, but his comments to German Sky Sports may take some of his countrymen by surprise.

"I have been at Bayern for six years," he said after opening the scoring in Munich's 2-0 win at home to Eintracht Frankfurt on Saturday which kept Bayern seven-points clear at the top of the Bundesliga.

"Here it is always good, here I am happy and here it's fun.

"That is more important for me than the national team."

Ribery has courted controversy during his time at Bayern after it emerged in 2010 he had had sex with an under-age French prostitute in a scandal which involved other members of the France team.

The former Marseille star has been in superb recent form for Munich, but admitted the German league leaders were jaded in Saturday's league win over Frankfurt having hammered Lille 6-1 in the Champions League last Wednesday.

Ribery says the relentless stream of Bundesliga, Champions League and German Cup matches are taking their toll on Munich who, like all Germany's Champions League teams, have played two games a week for the last month.

"Playing every three days doesn't make it easy, and that was the case here," he said.

"Frankfurt were fresher, but we had lots of chances and should have taken the lead earlier."