Bayern Munich extended their lead to eight points clear at the top of the Bundesliga as their make-shift side drew 1-1 at ten-man Nuremberg on Saturday in the 185th Bavarian derby. 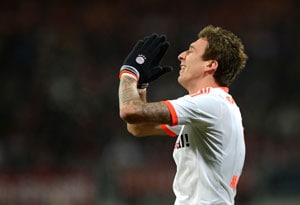 Bayern Munich extended their lead to eight points clear at the top of the Bundesliga as their make-shift side drew 1-1 at ten-man Nuremberg on Saturday in the 185th Bavarian derby.

With Bayern facing a crucial Champions League clash at Valencia on Tuesday, Heynckes was obviously thinking ahead to Europe and accepted the draw.

"We started well and dominated, but failed to get the second or third goal.

"In the second-half we experienced a very different Nuremberg, one which was committed to playing forward more.

"Because of the second-half, we have to accept only taking a point."

Nuremberg got back on level terms when ex-Munich midfielder Markus Feulner, who spent six years at Bayern as a youth player, smashed in his long-range shot on 46 minutes to level.

The hosts were reduced to 10 men when midfielder Timo Gebhart was shown a second yellow card for elbowing Germany star Bastian Schweinsteiger in the face with 14 minutes left.

But Nuremberg hung on to claim a point which moved them up to 14th in the league.

Second-placed Schalke can reduce Bayern's lead if they win at Bayer Leverkusen later while Eintracht Frankfurt stayed up with the league leaders in third by claiming a 4-2 win at bottom side Augsburg.

There were three goals in the first 15 minutes at Dortmund as hosts Borussia ran out 3-1 wins over second-from-bottom Greuther Fuerth.

Germany midfielder Mario Goetze made it 3-1 at half-time with a sublime goal on 42 minutes when he drew Fuerth goalkeeper Max Gruen to keep the defending champions fourth.

Hamburg enjoyed a 1-0 win at home to Mainz as South Korea striker Son Heung-Min scored the contentious winner in the 63 minutes after being set up by a pass from midfielder Maximilian Beister.

Wolfsburg, 16th and amongst the relegation places, are at Hoffenheim on Sunday with ex-Bremen general manager Klaus Allofs having been installed as sports director after 13 years at Werder.

Caretaker coach Lorenz-Guenther Koestner is set to stay on as coach and Allofs has been tasked with keeping the 2009 champions up, while Werder Bremen host Fortuna Duesseldorf.

Comments
Topics mentioned in this article
Football Mario Mandzukic Bayern Munchen Borussia Dortmund Shinji Okazaki
Get the latest updates on IPL 2021, IPL Points Table , IPL Schedule 2021 , live score . Like us on Facebook or follow us on Twitter for more sports updates. You can also download the NDTV Cricket app for Android or iOS.