Bayern Munich boss Karl-Heinz Rummenigge on Thursday called for calm despite the German giants' back-to-back home defeats which have effectively dumped them from both the league and cup. 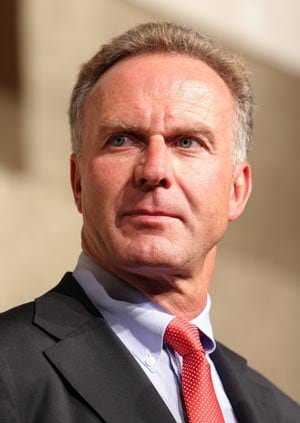 Bayern Munich boss Karl-Heinz Rummenigge on Thursday called for calm despite the German giants' back-to-back home defeats which have effectively dumped them from both the league and cup.

Bayern were knocked out of the German Cup thanks to a 1-0 semi-final defeat to Schalke at Munich's Allianz Arena on Wednesday, four days after they lost 3-1 at home to league leaders Borussia Dortmund.

Having done the league and cup double last season, Bayern are now out of the cup and 16 points behind Dortmund in the league with 10 games left to play this season and face third-placed Hanover on Saturday.

As captain Philipp Lahm said after Wednesday's defeat, a season without silverware from the league and cup is not a good one for Bayern.

"The game in Hanover is perhaps now our most important match of the whole season," said Lahm.

Munich need to bounce back with a win at Hanover as they focus on their new goal of finishing second in the league to be sure of a Champions League place next season.

"Especially in the wake of a defeat like this, we're well advised to stay calm," said Rummenigge.

"We have an important Bundesliga fixture on Saturday.

"We're playing the team who are ahead of us by a place and two points, so criticism won't help.

"This cup exit is a huge disappointment, but we lacked that little bit of luck you always need, so we simply have to accept it."

Defeat at Hanover is not a scenario director of sport Christian Nerlinger is willing to consider.

"What should happen then? Should I throw out the players, the coach or the director of sport?" he mused.

"We aren't interested in such scenarios; I assume we will win in Hanover."

Although Nerlinger says coach Louis van Gaal's position is not up for discussion, the Dutchman himself is all too aware of reality as signs demanding 'Van Gaal out!' could be seen at Munich's Allianz Arena.

"I know that questions are asked when you lose two important games, that is always the case," said van Gaal.

"I will just get on with my job; do as well as I can and let the board of directors decide."

Bayern make no secret of their desire to dominate German football and although they are well placed in the Champions League, their recent form is not going down well with Rummenigge.

"We're not getting the results. That's never okay, you're never happy," he fumed.

Van Gaal is under contract until June 2012, but Rummenigge says there can be no knee-jerk reactions from Bayern's board.

"It's vital we stay calm, despite the deep disappointment and the high emotional temperature," he said.

"We need to bounce back, and take the points we require to qualify for the Champions League again next season.

"We don't want turbulence, we want to stay calm."

Bayern host Inter Milan in the second-leg of their Champions League Round of 16 tie on Tuesday March 15 and hold a 1-0 lead from the first match in Italy.

But Rummenigge says it is pointless to focus on trying to win European football's top domestic prize at the expense of their Bundesliga campaign.

"I think we shouldn't start dreaming, saying to ourselves: 'Now we'll have to win the Champions League'," he said.

"We've had the first leg of the Round of 16, nothing more.

"I can tell you now that the return at home to Inter will be very tough, but that's still a long way off.

"The vital thing is that we try and win in Hanover on Saturday.

"Then we have Hamburg, and then we'll focus on Inter."