Bayer Leverkusen lost 2-1 at the Camp Nou in October, despite taking a shock lead, and want to avoid a repeat of the 6-1 pounding Barcelona dished out to Roma a fortnight ago when Luis Suarez and Lionel Messi ran riot in the home match. 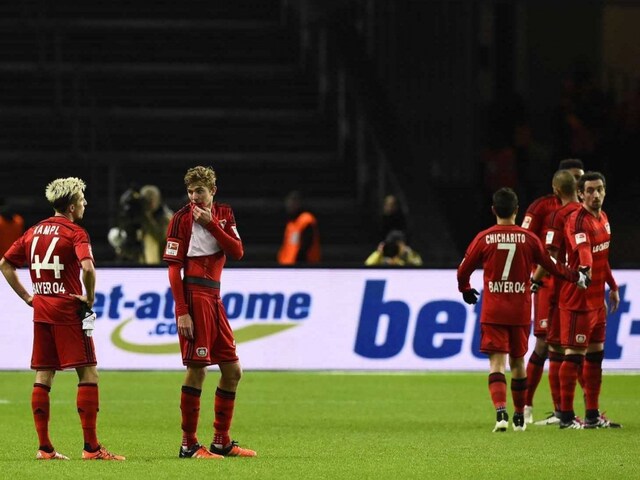 Bayer Leverkusen have lost their last 6 games vs Barcelona.© AFP

Bayer Leverkusen must break their six-match losing streak against reigning champions Barcelona on Wednesday if they are to have any chance of reaching the Champions League's knock-out stages.

Leverkusen lost 2-1 at the Camp Nou in October, despite taking a shock lead, and want to avoid a repeat of the 6-1 pounding Barcelona dished out to Roma a fortnight ago when Luis Suarez and Lionel Messi ran riot in the home match.(Chelsea's Fate Hangs in the Balance)

Roger Schmidt's Leverkusen face the uphill task of having to beat Barcelona and hope Roma drop points at home to BATE in Wednesday's other game in order to leap the Italians in the group and snatch a place in the last 16.

Leverkusen's captain Lars Bender faces a race to be fit as he tries to shake off an ankle injury.

The Germans are looking to reach the last 16 for the third year running, but have not won in Group E since beating BATE 4-1 in September.

"We'll need to take all of the few chances which come our way against Barcelona," said Leverkusen defender Omer Toprak.

Undefeated in Europe this season, Barcelona, coached by Luis Enrique, have already booked their place in the last 16 as group winners, while Leverkusen are third in the table.

Enrique is not likely to play a full-strength side having already won the group and the Spanish giants have a busy period coming up with the Club World Cup starting in Japan next week and league games over New Year.

Barcelona's Lionel Messi is likely to play in Leverkusen having looked short of match fitness after injury.

Dani Alves misses out due to suspension and Mathieu, Sergi Roberto, Douglas and Rafinha are all out due to injury.

Germany goalkeeper Marc-Andre ter Stegen is set to play having recovered from a knee problem to play with the Spanish giants on his home soil.

Barcelona are looking to end the group stage undefeated for the first time since the 2011/12 campaign.

They face a Leverkusen side who are not in form having dropped to eighth in the German league after their 2-1 defeat at Hertha Berlin on Saturday with ten men.

Javier Hernandez has scored 11 goals in his last ten Leverkusen appearances and netted their consolation in Berlin -- their third defeat in five Bundesliga games.

With Barcelona's qualification already assured, Enrique has left out Gerard Pique and Andres Iniesta from the matchday squad.

The Germans' cause has not been helped by the inclusion of forwards Lionel Messi, Neymar and Luis Suarez for the trip to flight to Leverkusen.

Messi, Suarez, Neymar have scored 126 goals between them in 2015, the same number as the entire Bayern Munich team has achieved in the same period.

Barca on a 12-game unbeaten run, but Saturday's 1-1 draw at Valencia ended a seven-game winning streak in which they had scored 28 goals.

Comments
Topics mentioned in this article
Bayer Leverkusen Barcelona Football
Get the latest Cricket news, check out the India cricket schedule, Cricket live score . Like us on Facebook or follow us on Twitter for more sports updates. You can also download the NDTV Cricket app for Android or iOS.