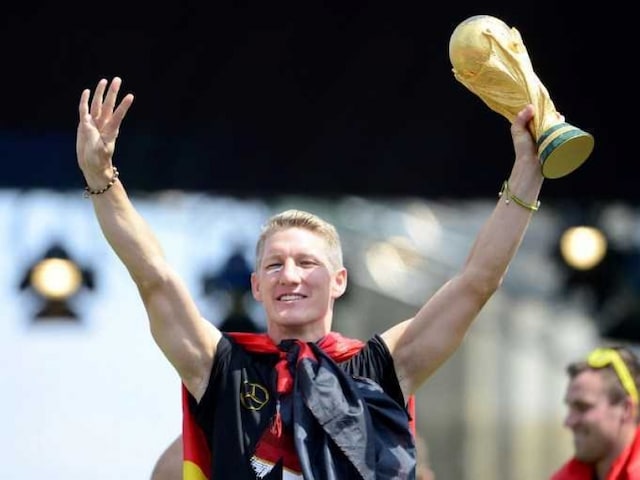 The 31-year-old Manchester United midfielder took to social media to call time on his international career, less than a month after Germany's Euro 2016 campaign.

Schweinsteiger leaves the German national team with his club future also in doubt. According to reports, Manchester United manager Jose Mourinho has named him along with eight other players that will leave the club.

The German star still has two years left on his United contract.

On the domestic front, Schweinsteiger and Serbian tennis star Ana Ivanovic, who had been dating since the summer of 2014, tied the knot earlier this month in Venice.

The defensive midfielder, who scored against Ukraine in Germany's opening pool game in the Euro 2016, said that he felt this was the right time to quit international football.

"I have just told the national head coach (Joachim Loew) to no longer consider me for selection in the future as I would like to retire," wrote Schweinsteiger.

"I would like to thank the fans, the team, the German Football Association and the coaches.

"In 120 internationals, I have been allowed to run out for my country and experience moments which were indescribably beautiful and successful."

Germany suffered a shock semifinal defeat to hosts France to bow out of the 2016 European Championships and Schweinsteiger spoke about how much he wanted to win the title.

"Joachim Low knew how much 2016 has meant to me with the European Championship in France because I wanted to win this title.

"It was not meant to be and I have to accept that."

Schweinsteiger put in an inspired performance to help Germany secure a 1-0 extra-time victory over Lionel Messi-led Argentina for their fourth World Cup title.

"Winning the 2014 World Cup was an historic and emotional moment for us, which will not be repeated again in my career," said Schweinsteiger.

"Therefore, it is the right time and sensible to finish now and to wish the national team all the best for the qualifiying stage and the 2018 World Cup.

"Finally, I just want to say to our fans: 'it was an honour to have been able to play for you, many thanks for everything that I was able to experience with you'."

Comments
Topics mentioned in this article
Germany Bastian Schweinsteiger Manchester United Football
Get the latest Cricket news, check out the India cricket schedule, Cricket live score . Like us on Facebook or follow us on Twitter for more sports updates. You can also download the NDTV Cricket app for Android or iOS.