Luis Suarez scored a goal with his backheel in a La Liga match against Mallorca and called it the "best goal of my career". 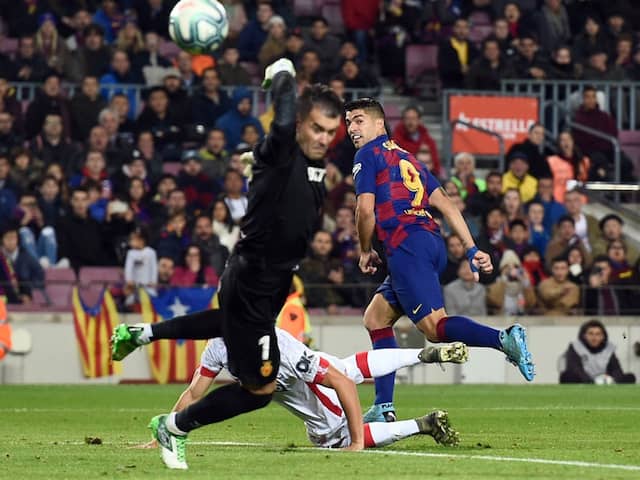 Barcelona stars Lionel Messi, Luis Suarez and Antoine Griezmann were all on target as the Catalan giants beat RCD Mallorca 5-2 in a Saturday night La Liga fixture. Lionel Messi, after winning a record sixth Ballon d'Or, hit a sublime hat-trick while Luis Suarez and Antoine Griezmann scored a goal a piece. Luis Suarez, who described his goal as the "best" of his career, netted with a backheel as the ball went past RCD Mallorca's diving goalkeeper Manolo Reina.

He'll be screwing up the easiest of chances but will score the difficult goals.
LUIS SUAREZ ladies and gentlemens #BarcaMallorca pic.twitter.com/sYgoGU4dcn

Luis Suarez be something else.
Goal of the season. pic.twitter.com/g6Ma3bfuyt

What in the absolute everloving beautiful insanity did I just see Luis Suarez do? This backheel goal is...just...unbelievable. The inimitable @RayHudson with the perfect call, as always. pic.twitter.com/Ya9ubqhU3d

Describing it the "best goal" of his career, Luis Suarez said, it was a tight angle and going for a backheel was the last option he had.

"It's the best goal of my career," Suarez was quoted as saying by marca.com.

"I knew that it was a tight angle and the last option I had was to hit it with my heel. I was looking to bounce it because I had very little chance against the goalkeeper," he added.

The Uruguayan, 32, also said his Barcelona coach Ernesto Valverde told him that, he misses the easiest opportunities but converts the tough ones.

"(Ernesto) Valverde tells me that sometimes I miss the easiest ones and score the most difficult ones," Suarez said.

By the virtue of the victory at Camp Nou, Barcelona sit on top of La Liga table with 34 points. They will next take on Inter Milan in an away Champions League fixture.