Referee Carlos Del Cerro Grande said Javier Mascherano was dismissed for directing an insult, common in Argentina, towards the linesman but Barca appealed saying it was said in passing. 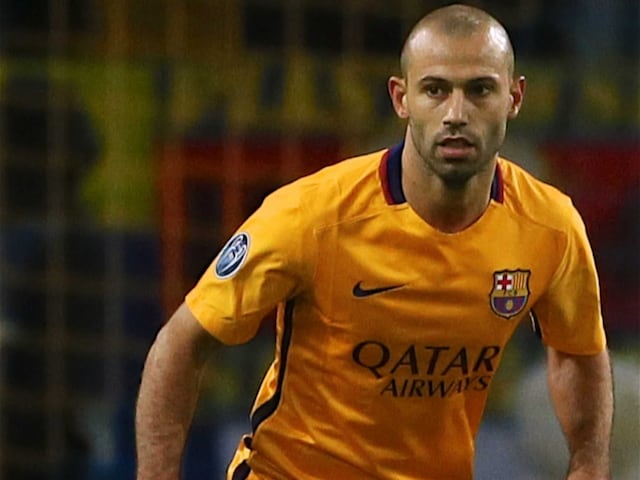 Javier Mascherano received the support of Barcelona manager Luis Enrique, who said the footballer did not argue with the linesman.© AFP
Madrid:

The Catalan side were worried the Argentine would miss El Clasico against Real Madrid on November 21 if he had been hit with a four-match ban since Barca's squad is already stretched. ('Absurd to Think of FC Barcelona Playing in France League')

Referee Carlos Del Cerro Grande said Mascherano was dismissed for directing an insult, common in Argentina, towards the linesman but Barca appealed saying it was said in passing.

The suspension means the defender will miss Barcelona's league matches against Getafe and Villarreal.

Barca have suffered a series of injuries to key players including Lionel Messi, Andres Iniesta and Rafinha.

The squad has also been hampered because the club have not been allowed to bring in players over the last two transfer windows due to a FIFA ban over the illegal signing of minors. (Neymar's Mother Cited in Transfer Fraud Case)

However, last season's treble winners are joint leaders of La Liga with Real Madrid on 21 points from nine games following their 3-1 win over Eibar and top their Champions League group.

Comments
Topics mentioned in this article
Javier Mascherano Barcelona Football
Get the latest Cricket news, check out the India cricket schedule, Cricket live score . Like us on Facebook or follow us on Twitter for more sports updates. You can also download the NDTV Cricket app for Android or iOS.