Barca's 2-1 loss to relegation fighters Leganes was the greater shock but Madrid's beating was more emphatic. 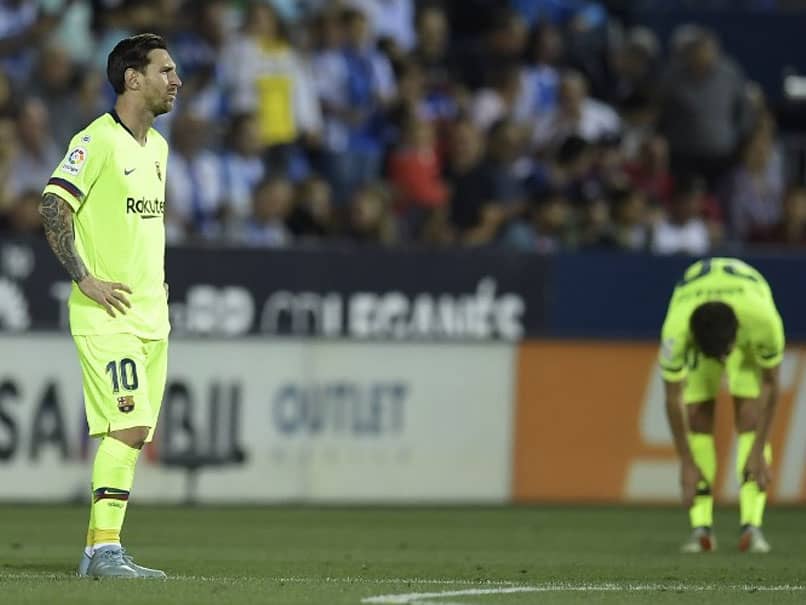 Barcelona face Athletic Bilbao on Saturday and then Tottenham at Wembley.© AFP

Barcelona conceded twice in 68 seconds and Real Madrid were three down at half-time as La Liga's two title favourites were each stunned by surprise defeats on Wednesday. Barca's 2-1 loss to relegation fighters Leganes was the greater shock but Madrid's beating was more emphatic, blown away by Sevilla during a torrid 39 minutes at the Ramon Sanchez Pizjuan. For both, it was their first defeat of the season and for both, defensive fragility was the key factor and a major concern with the second round of Champions League games to come next week.

By the end, Atletico Madrid, who had cruised to victory over Huesca on Tuesday and play Real on Saturday, were the biggest winners. After a stuttering start, Diego Simeone's side will jump above Real with a win at the Santiago Bernabeu.

Sevilla can be a formidable opponent on their own patch but few expected Leganes to inflict what was only Barcelona's second league defeat in 17 months.

Nabil El Zhar had nodded in an equaliser just 68 seconds before and by the end Philippe Coutinho's sumptuous early volley was reduced to little more than a footnote.

After drawing at home to Girona on Sunday, albeit with 10 men, Ernesto Valverde's selection also came under scrutiny, after he opted to rotate for the second time in three days.

Against Girona, it was Coutinho, Ivan Rakitic and Samuel Umtiti on the bench and just as they all had to be called upon in the second half at the Camp Nou, so were Luis Suarez and Jordi Alba this time.

"But obviously it is easy now to talk about the rotations -- in the end, matches are analysed on results -- but you can't win the league with only eleven players."

Barcelona face Athletic Bilbao on Saturday and then Tottenham at Wembley in the Champions League four days later but one point from two of La Liga's lesser opponents is a concern.

So is the form of Pique, who was also at fault against Girona and will almost certainly start against Spurs, with Umtiti suspended.

"You have to judge the whole team, not individuals," Sergio Busquets said.

"There are no excuses. We have to concede fewer goals and be more solid. Today the league isn't lost but we might miss these three points at the end of the season."

Real Madrid, who were just kicking off as Leganes closed out, could have pulled three points clear at the top but instead were three down at half-time for the first time in a league game since 2003, also against Sevilla.

Twice Jesus Navas sped away on the counter-attack, and twice he found Andre Silva, the first time with a deliberate cut-back, the second when his shot was palmed out for a rebound.

Wissam Ben Yedder added a third six minutes before the interval, volleying in from close range after the Madrid defence had pushed out.

That was all it took. Luka Modric had a goal ruled out by the Video Assistant Referee, his ankle straying just offside, before Gareth Bale missed a one-on-one. Sevilla were cheering every pass by the finish.