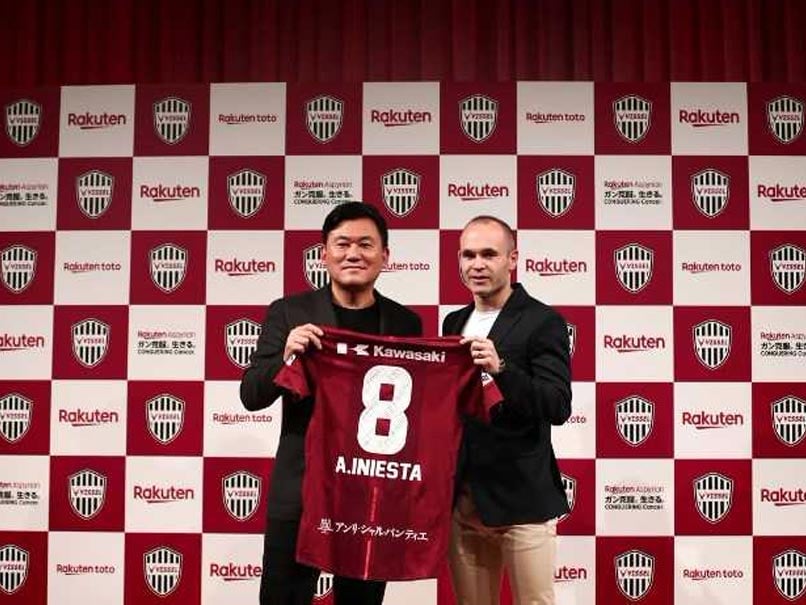 Barcelona legend Andres Iniesta joined Japan's Vissel Kobe on Thursday, calling his J-League move an "important career challenge". "This is a very special day for me," the 34-year-old World Cup winner said after signing his contract at a glitzy unveiling in Tokyo. "I had a lot of offers, other clubs showed an interest in me," added Iniesta, who is reported to have agreed a three-year deal with an annual salary of $30 million, comfortably a J-League record. "But I chose Vissel Kobe because it was an interesting project. There was also a lot of trust and confidence in me as a person and also as a player -- that was a big reason."

"I am confident that Iniesta's leadership philosophy and his DNA will be a terrific inspiration for not only Vissel Kobe but Japanese football," said Mikitani.

"His arrival in Japan will raise the profile of Japanese football globally. Iniesta will inspire and empower us to reach new heights in football in Japan. We are very proud to see this day come."

The Spain icon's decision to choose Kobe arguably represents Japanese football's biggest transfer coup, with many top players now moving to cash-rich Chinese clubs in the twilight of their careers.

It also comes as a timely boost to the J-League, which used to attract luminaries such as Brazilian great Zico and former England star Gary Lineker when it began in 1993 but has struggled to attract marquee players in recent years.

Iniesta will join former Arsenal striker Lukas Podolski in the western port city of Kobe after he completed a move from Galatasaray last summer. Podolski was quick to send a "welcome" tweet to Iniesta on Thursday.

"I'd like to help take this club forward and help the J-League grow in Asia," said Iniesta, who is set to join his new team mates after the World Cup in Russia.

"I'm looking forward to getting to know the Kobe players as quickly as possible to be able to help with that process."

Danish star Michael Laudrup, himself a former Barcelona fan favourite and one of Iniesta's boyhood heroes, also played for Vissel in 1996-97.

Iniesta, who famously scored Spain's winning goal against the Netherlands in the 2010 World Cup final, had been top of Mikitani's wishlist.

The billionaire businessman is also the founder and CEO of Rakuten, Barcelona's main sponsor, and was heavily involved in the deal that brought Iniesta to Japan.

Mikitani said Iniesta "plays the most beautiful soccer in the world", predicting his arrival in Japan could lead to an influx of top foreign players joining the J-League.

Iniesta played his final game for Barcelona in a 1-0 win over Real Sociedad last weekend in an emotional farewell to the club he joined as a schoolboy.

The mercurial midfielder won nine La Liga and four Champions League titles among a massive haul of trophies at Barcelona.

Iniesta had also been linked to a move to Chinese Super League side Chongqing Lifan but they denied the rumours.

As speculation of his next move reached fever pitch, Iniesta tweeted a photo of himself and Mikitani in a private jet overnight, along with emojis of the Japanese flag and a football.

Many Japanese fans retweeted the photo of the pair shaking hands and welcomed Iniesta to the country, while one user posted a cartoon meme of Iniesta dressed in a wizard's cloak and waving a wand.

Not everyone in baseball-mad Japan was blown away, however, as some struggled to comprehend the significance of Iniesta's move to East Asia.

One Twitter sage compared it to "Babe Ruth coming to the Yakult Swallows", while others suggested it was like Bruno Mars or Beyonce joining a Japanese teeny-bopper band.

Comments
Topics mentioned in this article
Andrés Iniesta Football
Get the latest updates on ICC T20 Worldcup 2022 and CWG 2022 check out the Schedule, Live Score and Medals Tally. Like us on Facebook or follow us on Twitter for more sports updates. You can also download the NDTV Cricket app for Android or iOS.