The Catalans have been on the brink of sealing their fourth championship in five years for a number of weeks, but will have matters in their own hands for the first time on Sunday and could even be crowned champions 24 hours earlier if Real Madrid slip-up away to Espanyol. 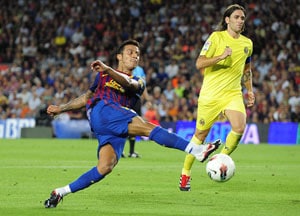 Barcelona midfielder Thiago Alcantara has admitted that his side are desperate to finally mathematically seal the La Liga title this weekend when they travel to face Atletico Madrid.

The Catalans have been on the brink of sealing their fourth championship in five years for a number of weeks, but will have matters in their own hands for the first time on Sunday and could even be crowned champions 24 hours earlier if Real Madrid slip-up away to Espanyol.

And Thiago insists that their disappointment at being hammered in the semi-finals of the Champions League by Bayern Munich will not dampen Barca's celebrations at regaining the title they lost to Real last season.

"We value the league a lot, we have been fighting for it since the start," he told the club's website.

"Last year we lost it and we want to get it back. The league is precious and we are longing for it.

"When you become used to something it seems like you don't value it. From the inside I can say that it is very difficult to face and win so many games."

Atletico ensured they will definitely play Champions League football next season with a 3-1 win over Celta Vigo on Wednesday, but Thiago doesn't believe that will take an edge off their game with places in the Copa del Rey final team against Real next week still to play for.

"The most important game is our one, independent of what Madrid do," he added.

"The Calderon is never easy, Atletico have qualified for the Champions League and are in the final of the cup. There is still time before the final and I am sure they will play a very serious game."

Lionel Messi is expected to start for Barca after coming off the bench to score twice against Real Betis last weekend as he continued to nurse a hamstring injury, whilst Victor Valdes and Pedro have both also been passed fit after missing the Betis game.

Atletico manager Diego Simeone meanwhile echoed Thiago's sentiments that his side will take the game seriously, but hopes there will be a party atmosphere at the Calderon after sealing Champions League qualification for the first time in four years.

"We cannot look further ahead than the next game because we have never done that and we need to look at Barcelona," he said.

"We know that it is going to be a Sunday in which we can join together with our fans to enjoy this direct qualification for the Champions League and it will be a nice duel against the possible league champions."

Elsewhere, Valencia can put the pressure on Real Sociedad in the fight for the final Champions League place by leapfrogging the Basques should they win at Rayo Vallecano on Sunday with Sociedad not hosting Granada until Monday.

Sociedad currently hold a two-point lead over their rivals, but would appear to have the tougher run-in as they have to travel to Sevilla and relegation-threatened Deportivo La Coruna as well as hosting Real Madrid in the final three games of the campaign.

And in the fight against the drop, the bottom five teams remain separated by just four points.

Mallorca, Celta, Zaragoza and Deportivo are all away this weekend to Athletic Bilbao, Betis, Levante and Valladolid respectively, whilst Osasuna have the chance to ease their relegation fears when they host Getafe on Sunday.

Comments
Topics mentioned in this article
Football Barcelona Real Madrid Carles Puyol Andres Iniesta Thiago Alcantara
Get the latest updates on ICC T20 Worldcup 2022 and CWG 2022 check out the Schedule, Live Score and Medals Tally. Like us on Facebook or follow us on Twitter for more sports updates. You can also download the NDTV Cricket app for Android or iOS.