Atletico de Kolkata An Opportunity to Give Something Back to a Neglected Sport, Says Sourav Ganguly

Former Indian cricket Sourav Ganguly, the co-owner of the Indian Super League franchise Atletico de Kolkata, hoped that his side will start the football chapter of the sport that is regarded very highly in Bengal 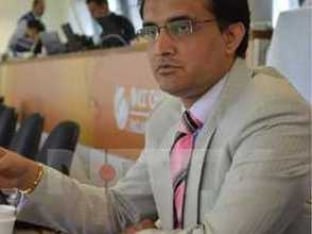 Former India cricket captain Sourav Ganguly is clueless about his 'future' in football, but the co-owner of the ISL franchise Atletico de Kolkata today said it was an opportunity to give something back to the sport. The former left-handed batsman said football was overshadowed by cricket's glamour and by starting up a franchise it was a time to give something back to the sport which occupies the heart of Bengal.

"It's an opportunity for all of us to give something back to the sport. A popular sport which is neglected in India. I won't say 'neglected' but I think which is covered by the razzmatazz of cricket in this country," Ganguly said in his address during the ceremonial launch of Atletico de Kolkata. "We never looked at numbers and the financial figures, it was a straightforward and bold decision. All we wanted was a team from Kolkata.

We really don't know what's the future of this but unless and until we don't begin somewhere we don't know where we will finish. "For me it's a beginning of something special hopefully. Having played football before I picked the cricket bat, I think this sport is in the heart of the city," he said. With chief minister Mamata Banerjee assuring all the support to the new team, Ganguly hoped that they would also emerge champions like what Kolkata Knight Riders did.

"As Didi said she was part of a cricket team that won the IPL, hopefully we can have another team that win the ISL this year," Ganguly said. "We all talk about cricket, we have our club Kolkata Knight Riders in IPL. Hopefully Atletico de Kolkata will start the football chapter of the sport that is very close to all of us in Bengal."

Atletico de Kolkata will have their home ground at the Vivekananda Yuba Bharati Krirangan, the giant 120,000 capacity stadium in Salt Lake. Ganguly hoped that the tournament would uplift the infrastructure in the state. "Hopefully, with this we will improve the infrastructure. I've spoken to Didi about their upcoming academy in the state hopefully we too will be associated with that. "The biggest reason to start the ISL is that to provide the infrastructure.

You look at the cricket grounds around the world, they have the best infrastructure," he said. "Hopefully we can create that in football and provide youngsters the facilities. We have a world class partners with us."

Ganguly further thanked their Spanish partners Atletico Madrid, who won the La Liga this season. "We thank Atletico Madrid for partnering us. Our partners had a wonderful season in the Spanish League, we thank for their association with us. I'm sure it will make our club a really formidable one."

Assuring all support to the newest football team from the city, Chief Minister Mamata Banerjee said: "Football is always in our blood. We can forget food but not football.

That shows the popularity of football in Bengal." Mamata hoped that football in the state would get a fillip with the support from partners Atletico Madrid.

"I am happy to know that we have partners from Spanish (La Liga champions) club Atletico Madrid. "Cricket is very popular because they have sponsorship, they have enough money and infrastructure, but it (cricket) is played in a few countries," she said.

"So it's a very good idea to promote football. I'm sure with players and coaches coming from all over the world, football in our country will benefit. With this, there can be a better tomorrow," Mamata said.

"We love cricket like anything, we are proud of our cricket team. Our team from Bengal have won the IPL this time," Mamta said. "It's the beginning. I believe with the able leadership of Ganguly, Goenka, Neotia, Parekh and Atletico Madrid we will also win this title (ISL)."

Pleased to see the logo of the 'flying' Royal Bengal tiger, Mamata said: "It's a beautiful logo in which the Royal Bengal tiger is flying. I asked about the concept and they told me it has come from the flying eagle concept. I said it's a very good idea.

"The jersey is also very colourful. It's a new initiative they have started. Although cricket is very popular, football too has the euphoria with the World Cup going on now."

While Garcia was absent, the team's marquee manager Habas attended the ceremonial launch along with the five co-owners and Atletico Madrid was represented by Ignacio Augillo director of corporate development.

It was exactly a month ago the five heavyweight consortium of former India captain Sourav Ganguly, Utsav Parekh of SMIFS Capital Markets Ltd, Sanjiv Goenka of RP-Sanjiv Goenka Group, Harshavardhan Neotia of Ambuja Neotia Group and their Spanish counterparts and La Liga champions Atletico Madrid, under the banner of Kolkata Games and Sports Pvt Ltd, were the first to launch team among the eight ISL franchisees.

Supported by the All India Football Federation (AIFF), the tournament is co-promoted by the IMG-Reliance and Star India and is tentatively scheduled to be held from September 19 to November 30

Comments
Topics mentioned in this article
Sourav Ganguly Football
Get the latest updates on ICC Women's Cricket World Cup 2022 and IPL 2022, check out the Schedule , Live Score and IPL Points Table. Like us on Facebook or follow us on Twitter for more sports updates. You can also download the NDTV Cricket app for Android or iOS.