Keisuke Honda and Shinji Kagawa netted a goal each to give Japan a 2-0 win over Jordan. 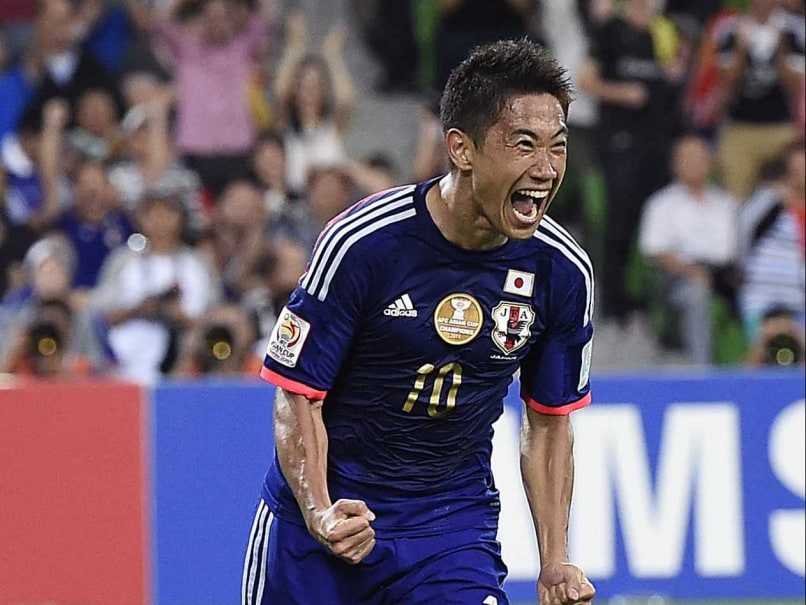 Keisuke Honda and Shinji Kagawa were on target to give Japan a 2-0 win over Jordan on Tuesday as the holders swept imperiously into the Asian Cup quarter-finals.

Talisman Honda snapped up a rebound on 24 minutes after Shinji Okazaki's low drive had been well saved by Jordan goalkeeper Amer Shafi to net his third goal in three games and take the Blue Samurai through as comfortable Group D winners.

Kagawa, largely ineffectual up to that point, added a second from close range eight minutes from time, capping Japan's third straight victory. They will face the United Arab Emirates in the last eight, while Jordan were eliminated.

Honda was Japan's heartbeat throughout the match, watched by 25,000 in Melbourne including Japan's tennis star Kei Nishikori, competing at the Australian Open across the road.

Shortly after putting Japan in front, he whipped in a corner which defender Masato Morishige met with a fierce header that forced an acrobatic tip-over from the busy Shafi.

Japan had the ball in the net after just 10 minutes, only for Takashi Inui's bullet volley to be ruled out after Okazaki was adjudged to have taken the ball out of play before crossing.

Honda had another goal disallowed for a questionable offside shortly before the hour mark and smashed a shot against the post in the last minute in a livewire performance.

Makoto Hasebe, making his 56th appearance as captain, bossed the midfield, constantly breaking up play to allow Honda and Yuto Nagatomo the freedom to run riot.

Japan, who won a record fourth Asian Cup by edging Australia in the 2011 final, thrashed Palestine 4-0 and beat Iraq 1-0 in their first two games and are slight favourites to lift the trophy again.

Comments
Topics mentioned in this article
Shinji Kagawa Keisuke Honda Japan Football
Get the latest updates on ICC T20 Worldcup 2022, check out the Schedule and Live Score. Like us on Facebook or follow us on Twitter for more sports updates. You can also download the NDTV Cricket app for Android or iOS.