AS Roma's campaign got off to a sluggish start under the new ownership of US billionaire Dan Friedkin, with last year's fifth-place outfit settling for a point. 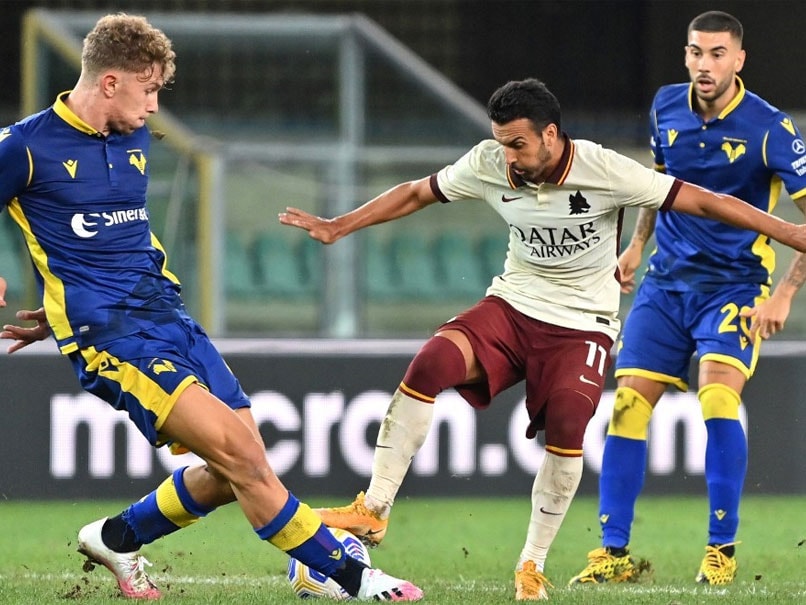 AS Roma settled for a goalless draw in their Serie A opener at Hellas Verona.© AFP

AS Roma settled for a goalless draw in their Serie A opener at Hellas Verona on Saturday with Gaetano Castrovilli scoring in a 1-0 win for Fiorentina against Torino behind closed doors before the return of a limited number of fans to stadiums 24 hours later. Sports Minister Vincenzo Spadafora has agreed that up to 1,000 spectators will be allowed at open-air sports events in Italy from Sunday. And nine-time reigning Serie A champions Juventus said they would kick off their season against Sampdoria "in the presence of a 1,000 guests" in Turin.

"No tickets will be sold for the match and we ask Juventus fans not to go to the Allianz Stadium in order to avoid creating any gatherings outside the stadium," they said in a statement.

Parma and Sassuolo have also said they will open their grounds for matches against Napoli and Cagliari.

"Access will only be possible by invitation.. to sponsors, who have shown great support lately," Parma said.

On the pitch, Roma's campaign got off to a sluggish start under the new ownership of US billionaire Dan Friedkin, with last year's fifth-place outfit settling for a point.

Bosnia forward Edin Dzeko was left on the bench for the side from the capital amid reports he is set for a move to Juventus.

At first dominating, the Romans were soon put under pressure by Verona with Antonio Mirante deflecting an Adrien Tameze shot over the bar just before the break.

The post again saved the Roma goalkeeper from a Federico Dimarco effort with ten minutes to go, while Roma's Leonardo Spinazzola also rattled the post after 85 minutes.

"We can't say that it would have been any different with Dzeko," said Fonseca whose side host Juventus in their second game next weekend.

"We had a very good first half, missing four or five goals. Then in the second half we made a lot of mistakes.

"Had we scored in the first half it would have changed everything."

In Florence, Franck Ribery wore Fiorentina captain's armband for the first match of the new campaign.

New Torino coach Marco Giampaolo could thank goalkeeper Salvatore Sirigu for keeping his side in the game pulling off two quickfire saves on Ivorian Christian Kouame just before the break.

The breakthrough came in the 78th minute when Federico Chiesa teed up Castrovilli to beat Sirigu.

Torino captain Andrea Belotti thought he had grabbed a point deep into injury time but was ruled offside.

Fiorentina Football
Get the latest updates on IPL 2021, check out the IPL 2021 Schedule and Indian Premier League Live Score . Like us on Facebook or follow us on Twitter for more sports updates. You can also download the NDTV Cricket app for Android or iOS.