Edin Dzeko was sent off 16 minutes before the end but teenager Sadiq Umar sealed the match late on to end a seven-match winless run for AS Roma that included Wednesday's Italian Cup exit against second-division Spezia. 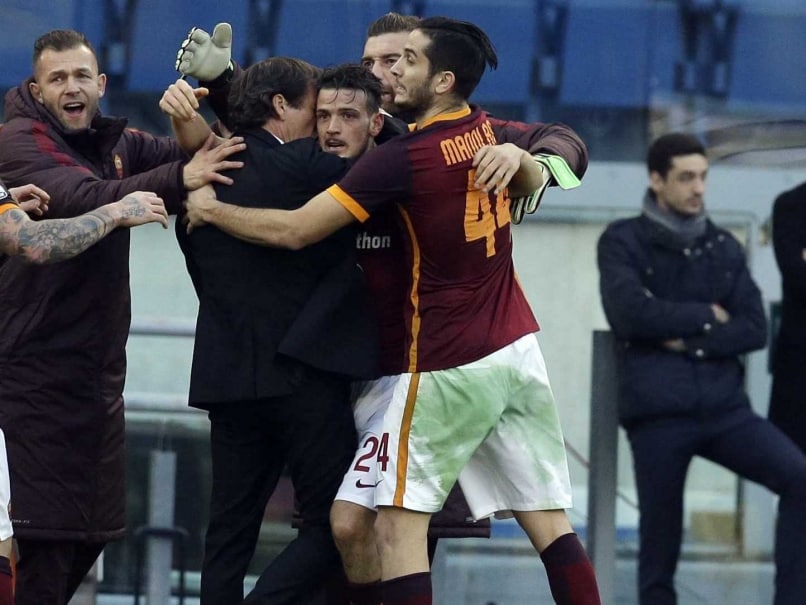 AS Roma's Alessandro Florenzi, second from right, hugs coach Rudi Garcia after scoring during a Serie A match against Genoa.© AP
Milan:

AS Roma ended their winless streak with a 2-0 victory over Genoa in the Italian Serie A on Sunday to relieve some of the pressure on coach Rudi Garcia. (Empoli Defeat Bologna, Secure Fourth Consecutive Win in Serie A)

Edin Dzeko was sent off 16 minutes before the end but teenager Sadiq Umar sealed the match late on to end a seven-match winless run for Roma that included Wednesday's Italian Cup exit against second-division Spezia.

Roma remained fifth after Juventus, Napoli and Fiorentina all won. (Inter Milan Stay on Top in Serie A, Fiorentina Held by Empoli)

Leader Inter Milan can restore their four-point advantage with a victory at home to Lazio later.

Reports in Italy said Garcia faced dismissal if Roma failed to beat Genoa in the final match before the winter break.

Florenzi netted the all-important goal two minutes from the break, volleying in at the back post after Lucas Digne's cross was deflected by Genoa defender Ezequiel Munoz.

Dzeko was shown a straight red in the 74th minute for dissent and Genoa almost took advantage of their numerical superiority before Sadiq secured the win seven minutes after coming off the bench, heading in a cross from fellow substitute William Vainqueur.

It was the 18-year-old Sadiq's first Serie A goal in his third appearance.

Comments
Topics mentioned in this article
Roma Napoli AC Milan Inter Milan Genoa Edin Dzeko Football
Get the latest updates on SA vs IND 2021-22, check out the Schedule and Live Score . Like us on Facebook or follow us on Twitter for more sports updates. You can also download the NDTV Cricket app for Android or iOS.