Everton playmaker Mikel Arteta faces several weeks on the sidelines after limping out of the Toffees 1-1 draw with Birmingham at Goodison Park. 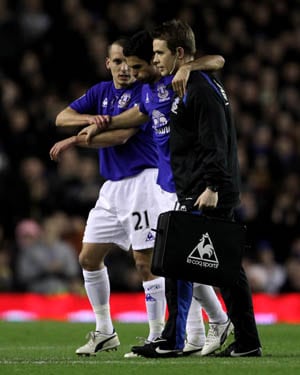 Everton playmaker Mikel Arteta faces several weeks on the sidelines after limping out of the Toffees 1-1 draw with Birmingham at Goodison Park.

Spanish midfielder Arteta was substituted within the opening 10 minutes of Wednesday's drab Premier League encounter, which saw Birmingham inch out of the relegation zone on goal difference.

Arteta left the field with what looked like a hamstring injury, and his likely absence gives Everton manager David Moyes another headache with Marouane Fellaini and Tim Cahill already on the casualty list.

"It looks like a hamstring injury," Moyes told evertonfc.com. "It's too early to say - I'm not sure but I'm guessing he will be out for a few weeks."

Any injury to Arteta would be a bitter blow as the inspirational playmaker had just started to show glimpses of his best form in recent weeks.

Arteta's absence for much of Wednesday's encounter was keenly felt by the home side, who salvaged a point through John Heitinga shortly before half-time after Jean Beausejour had given Birmingham the lead.

Although Everton dominated possession in the second half, they rarely looked like grabbing a winner, and Moyes admitted that Arteta being replaced so soon had hurt his team.

"It was a big blow for us because we needed some creativity and I knew that if we didn't have him, we would be struggling to create too much," Moyes said.

"Leon Osman did, but we were struggling otherwise really to make anything happen. It was a bit frustrating," Moyes said.

"We didn't play well enough probably to win the game, but we had a few half-chances."

Birmingham boss Alex McLeish was satisfied with a hard-earned point.

"I think that is an apt way to describe it - a battling point," McLeish said. "We started very brightly and got the opening goal. Then the players showed that tremendous resilience that they have."

"We tried to be a little bit more predatory, but we never really had the composure in terms of the passing in the second half.

"But sometimes you need to get points in an ugly fashion."

Comments
Topics mentioned in this article
Football Steven Gerrard Birmingham City Liverpool Chelsea Arsenal Mikel Arteta Everton
Get the latest updates on ICC T20 Worldcup 2022 and CWG 2022 check out the Schedule, Live Score and Medals Tally. Like us on Facebook or follow us on Twitter for more sports updates. You can also download the NDTV Cricket app for Android or iOS.