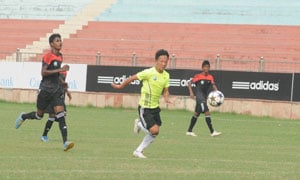 Army Boys, Bihar, and OM Roy High School, Meghalaya, advanced to the Under-17 boys' semi-final of the 54th Subroto Cup by defeating NCC, West Bengal and Sikkim, and BSL, Jharkhand, in their quarter-finals at the Ambedkar Stadium here Tuesday.

While Army Boys outplayed NCC 1-0 thanks to a first-half strike by Saroj Rai, OM Roy HS went through courtesy a couple of late goals by Mebanshan Suting.

Army Boys and the Meghalaya school will face each other in the semi-final October 12.

The Army Boys-NCC match was a one-sided affair with the former enjoying the upper hand. NCC played better in the second half and created a few chances but were let down by poor finishing. They almost equalised 10 minutes from end but Bijoy Jirel hit the upright from close range.

The second quarter-final was a defensive battle since both teams preferred to adopt that approach. For most of the game, scoring chances were few. Those which materialised were successfully dealt with by both defences.

Meghalaya clinched the issue late in the second half as Suting took advantage of a tiring Jharkhand defence.

In another match, Oman suffered their second consecutive defeat as a much superior Goa registered a 2-1 win. The Goan team includes several members of the Indian U-17 squad.

Among girls', skipper Dorothi hogged the limelight with four goals as Burguri High School, Assam, thrashed Dona Paula HS, Goa, 3-0. Dorothi have Assam a 2-0 lead within the first five minutes and Goa never recovered from there. The other goal was scored by striker Bashuabi.

Ahlcon Public School, Delhi, survived a torrid time in the second period to hold a much superior IPSC Girls to a goal less draw.