Superstar footballer Lionel Messi is set to keep his date with India and unfold his magic when he leads Argentina in a FIFA international friendly against Venezuela on Friday when the euphoria of one of the most high-profile matches in the country reaches the crescendo. 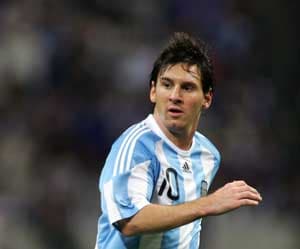 Superstar footballer Lionel Messi is set to keep his date with India and unfold his magic when he leads Argentina in a FIFA international friendly against Venezuela on Friday when the euphoria of one of the most high-profile matches in the country reaches the crescendo.

History will be scripted at the 120,000-capacity Yuba Bharati Krirangan at Salt Lake when the two time world champions with the world's best footballer in their ranks take on their South American rivals.

24-year-old Messi, the twice World Footballer of the Year and nicknamed 'The Flea', will be cynosure of all eyes for the football-crazy city that had in the past hosted the likes of Pele, Oliver Kahn, Diego Maradona, Gerd Muller and Diego Forlan.

The response of the football fans has not been as overwhelming as compared to Pele's visit with Cosmos for an exhibition fixture against Mohun Bagan in 1977 or more recently the euphoria generated by Maradona.

But it will hardly matter to coach Alejandro Sabella who will debut as Argentina coach.

After their debacle in Copa America where they are champions 14 times but failed to get past quarterfinals this time in July, Argentina are in process of rebuilding their side under Sabella with an eye on 2014 World Cup.

From here the Argentines travel to Dhaka for a second friendly against Nigeria on September 6.

The former Estudiantes coach, who takes over the reigns of the national team after the dismissal of Sergio Batista, who was fired after their quarterfinal exit in Copa America in July, has already shown his eagerness to begin on a winning note.

Messi has been in the prime form of his career in FC Barcelona and notwithstanding the criticism over his dip in performance when he dons Argentina jersey, he will be the cynosure of all eyes.

There is also the Real Madrid duo of Angel Di Maria and Gonzalo Higuain, another FC Barcelona star Javier Mascherano who will will no more have the captaincy burden, besides other top players who will be seen in action.

In Copa America under Batista, a 4-3-3 formation was employed but with Sabella saying that he wants to give Messi a free hand it remains to be seen about the formation.

Three Argentina players - Lisandro Lopez, Cristian Ansaldi and Ezequiel Garay - have been ruled out of tomorrow's match after suffering injury blows while playing for their respective clubs but Sabella has enough ammunition to make a winning start.

"My first game in command of the team. It's very important to make a good beginning. Winning will give us confidence. Yes this is the beginning of a long trip ahead and hope it finishes with qualification to the World Cup," Sabella said.

But Venezuela, who finished fourth in Copa America will definitely not be a cakewalk and an upset cannot be ruled out for the Messi and Co.

Incidentally, this will be the real dress rehearsal for both the teams who will lock horns again on October 11 in a 2014 World Cup qualifier.

Besides the big names, there are also quite a few to look out for in the Albicelestes ranks, including the home grown goalkeeper Esteban Andrada, the only player in the team who does not play in Europe.

Andrada, who was the first to reach here along with coach Sabella, had long goalkeeping drill and there is chance, though small, of him coming in place of the experienced Sergio Romero for a debut at the senior level.

Sabella, in his interaction to the media, had revealed his plans of bringing a playmaker to leave Messi in a comfort zone and the highly-rated Ricardo Alvarez, a lanky creative midfielder who joined Inter from Velez Sarsfield this summer, fits the bill.

Known for their beauty queens, Venezuela's football was not known till 1967 when they first competed in Copa America. Straightaway, they finished fifth in the coveted Latin American tournament.

But football became more popular in the baseball-oriented country when the former Spanish colony hosted Copa America in 2007 and made it to the quarterfinals.

Coach Cesar Farias said they are no more the Cindrella football country and their fourth place finish in Copa America 2011 only affirms that.

"In recent years, we have able to been grow in the leagues. In Copa America we had a very good presentation. Results in Copa America showed that the teams are very close right now. We are obligated to be in the next World Cup," Farias said about the 44th ranked side who have the dubious distinction of being the only South American country not to qualify for the World Cup till now.

Their recent rise definitely will be a threat to the Argentines who exited from the Copa America quarterfinals after losing to Uruguay.

Venezuela will bank on their talismanic captain Juan Arango. The 31-year-old midfielder, who currently plays for Borussia Monchengladbach, is the most capped player.

Getafe's Nicolas Fedor and Salomon Rondon will be the ones to watch out for in the Venezuelan forward line-up and coach Farias will bank on the duo to bring their scoring touch in the battle against Argentina.

Umar Akmal Suspended By Pakistan Cricket Board Amid Anti-Corruption Probe