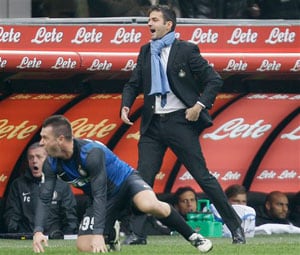 Inter's 2-2 draw with Cagliari at their San Siro ground on Sunday was marred by controversy after the hosts were denied a late penalty that could have allowed them to collect all three points.

Stramaccioni was red carded for protesting against the decision not to award the spot-kick while Cassano remonstrated with the referee on the way down the players' tunnel after the final whistle.

Serie A officials said in a statement Stramaccioni was banned from the touchline for the next league game after "protesting a refereeing decision, leaving the designated coach's technical area and making offensive remarks to match officials".

Cassano's ban was for "making offensive remarks to the referee on the way down the players' tunnel following the game".

Comments
Topics mentioned in this article
Antonio Cassano Football Inter Milan Genoa
Get the latest updates on IPL 2021, check out the IPL 2021 Schedule and Indian Premier League Live Score . Like us on Facebook or follow us on Twitter for more sports updates. You can also download the NDTV Cricket app for Android or iOS.