Mohun Bagan was a goal down against bitter rivals East Bengal in Kolkata when a stone hurled from one of the stands -- and apparently aimed at the referee -- hit midfielder Syed Rahim Nabi. 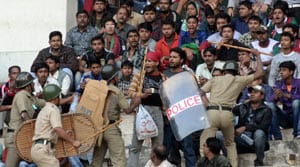 In a massive reprieve for Mohun Bagan, the All India Football Federation on Tuesday revoked the two-year ban on the club while imposing a meagre fine of Rs 2 crore for abandoning its I-League derby against East Bengal mid-way, last December.

The decision was taken during the AIFF's executive committee meeting, chaired by president Praful Patel.

The I-League's core committee had earlier banned Mohun Bagan from the I-League for two years for breaching of rules.

"The executive committee, after due deliberation, Mohun Bagan will be continue to play in the current season, but they will lose all the 12 points they have earned so far in the league. They will start with zero points and will have to pay Rs 2 crore as compensation," Patel said here.

"There is a panel provision under which the quantum of damage can be decided by the executive committee," he added.

He said the decision was arrived at keeping in mind the larger interest of the sport, the players fans and all stakeholders involved.

Among other decisions related to the contentious issue, no official from Mohun Bagan will be allowed to represent the club in AIFF or I-League meetings in the current calendar year.

"We have also asked them to provide an undertaking that they will never again breach the rules or get involved in an act of indiscipline," Patel said.

I-League CEO Sunanda Dhar will chart out a revised fixture and Mohun Bagan will be have to pay the fine before their next match.

Club captain Okolie Odafa's case has been referred to the disciplinary committee of the federation.

Patel, however, made it clear that if any club is found to be flouting with the rules in future, there will be no scope for reconsideration.

"This is a first and last in Indian football. The committee does not mean that we found any merit (in Bagan's plea). We have only reduced the quantum of the punishment."

Mohun Bagan were a goal down against bitter rivals East Bengal in Kolkata when a stone hurled from one of the stands -- apparently aimed at the referee -- hit midfielder Syed Rahim Nabi.

The match resumed after a 13-minute stoppage towards the end of the first half, but Mohun Bagan refused to take the field after the interval as India international Nabi was treated for a fractured right jaw.

The decision to cancel the 12 points has left Mohun Bagan at the bottom of the 14-team league and fighting to avoid relegation, and with Odafe out for at least two matches -- it could be depending more on the disciplinary committee's decision -- the club will have to play really well in the remaining 16 matches to avoid playing in the second division next season.

The president, who is also a union minister, said the club has expressed an unconditional apology.

In other decision, Patel said the AIFF will be inviting bids for two new clubs who will get a direct entry into the I-League 2013-14 season.

"The clubs will be outside Goa and Kolkata as we want to make the league pan-Indian. But the clubs will have to come with the commitment to build infrastructure. Clubs need to have their own stadium. The bids will be finalised in March so that the new teams get an opportunity to choose players," Patel said.

Institutional teams like Air India and ONGC are all set to be scrapped for repeatedly failing to meet the deadlines for fulfilling the AFC's licensing criteria.

"We have been at the receiving end of AFC because of them. We have lost points for earning berths in the Champions League. So, the decision will be taken keeping in the mind the interest of Indian football."

Patel also said that they are going to change rules in the constitution that can have shortcomings.