AFC Cup: Bengaluru FC Knocked Out In Penalty Shootout In Playoff Round

Bengaluru FC lost in the penalty shootout to Maziya S&RC after the tie finished 4-4 on aggregate. 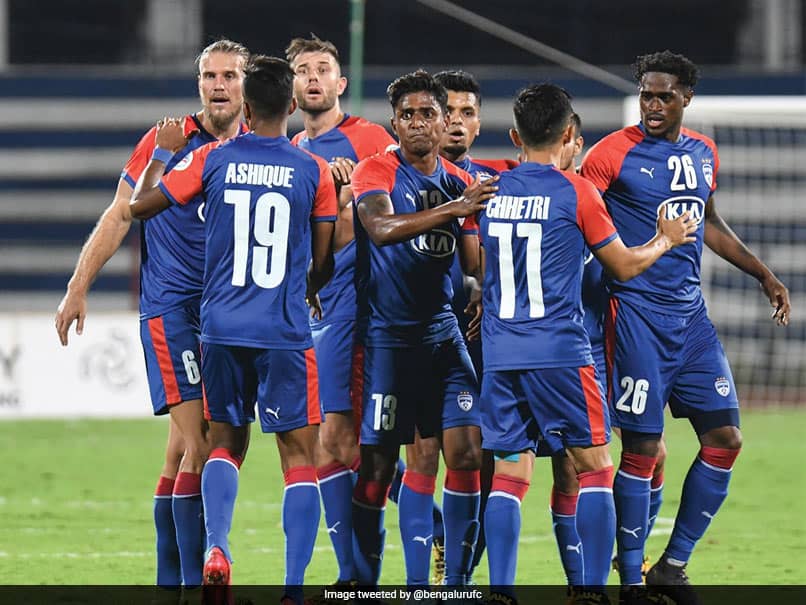 Bengaluru were knocked out of the AFC Cup by Maldivian club Maziya S&RC.© Twitter

Bengaluru FC bowed out of the AFC Cup in the playoff round after a penalty shootout against Maldivian club Maziya S&RC saw Hussain Nihan score from the deciding spot-kick at the Kanteerava Stadium in Bengaluru on Wednesday. Goals from Sunil Chhetri (80', 120') and Deshorn Brown (58') had made it 3-2 for the Blues, but the match went into penalty shootout as the teams were tied 4-4 on aggregate. Terming the fixture as a 'final' in his pre-match press conference, Carles Cuadrat rolled out a starting eleven that had Erik Paartalu, Deshorn Brown, Nili Perdomo and Juanan Gonzalez. Suresh Wangjam, who missed the away tie with a suspension, operated in the midfield, while Udanta Singh and Ashique Kuruniyan were on the wings.

In a first half that the Blues completely owned in terms of possession, Paartalu saw a long-range shot on target palmed away by goalkeeper Ovays Azizi. Bengaluru had Maziya on the ropes, winning a succession of set-pieces but failing to capitalise on any.

Cuadrat didn't waste time in bringing Sunil Chhetri on for Udanta just minutes after the restart, as Bengaluru stepped up the attack in search of that elusive goal. The breakthrough came in the 58th minute when Brown finished off a move that Wangjam did brilliantly well to create. Grabbing the ball down the left, the youngster ran a fair distance before getting into the Maziya box and playing the perfect cut-back to Brown who finished it first-time with a firm left footer.

But just when it looked like Bengaluru were in firm control, Maziya drew level in the 74th minute through substitute Ibrahim Waheed who he was set up by Cornelius Ezekiel. The goal put the aggregate score at 3-2 in favour of the Maldivian side.

With the clock running down, Bengaluru turned to a familiar face to pull them back into the game as Chhetri scored in the 80th minute to make it 3-3 on aggregate.

The see-saw encounter took yet another turn when Ezekiel, who set up Maziya's first goal, scored in the 102nd minute to shift the aggregate 4-3 in his side's favour. With away goals scored in extra time holding no advantage, all Bengaluru needed was one of their own to keep the tie alive.

And Chhetri chose the first of three additional minutes in the second half of extra time to pull Bengaluru right back into the game with a peach of a freekick that he sent home directly from the edge of the box to make it 3-2 on the night and 4-4 on aggregate and take the game to penalties.

However, Rahul Bheke and Parag Srivas missed their penalties as the Blues went down 3-4 in the tie-breaker to crash out of the competition.

Bengaluru next face ATK in the first leg of the Indian Super League semifinal at the Kanteerava Stadium on March 1.