Already through to the main tournament, India played out a 2-2 draw against Myanmar in the return-leg match of the AFC Asian Cup qualifying Group A match on Tuesday. 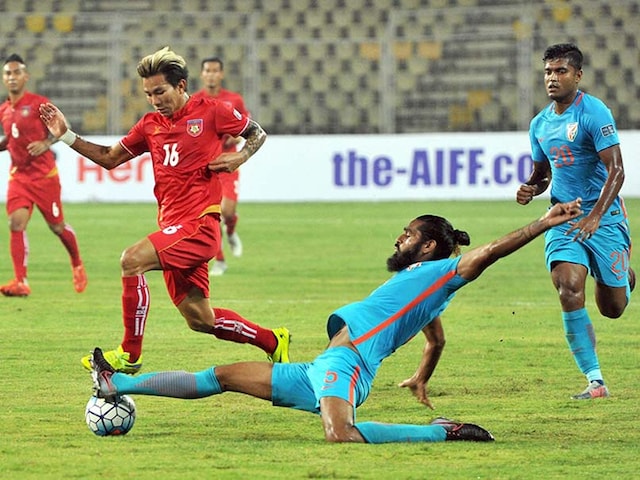 India played out a 2-2 draw against Myanmar in the return-leg match.© PTI

Already through to the main tournament, India played out a 2-2 draw against Myanmar in the return-leg match of the AFC Asian Cup qualifying Group A match on Tuesday. The home side came back twice in the match to hold the visiting side and continue their unbeaten streak in 13 matches. Myanmar scored through Yan Naing Oo (1st minute) and Kyaw Ko Ko (19th) while Sunil Chhetri (12th; penalty) and Jeje Lalpekhlua (69th) found the target at the Nehru Stadium here. India had beaten Myanmar 1-0 in the first leg in Yangon in March through a Chhetri winner.

With this draw, India are on the top of the group with 13 points from five matches. Myanmar are placed second with five points from four matches.

India have already qualified for the AFC Asian Cup 2019 in UAE after beating Macau 4-1 in Bangalore last month.

True to captain Chhetri's words that Myanmar were a tough side, the visitors scored as early as the first minute before the home team defence could settle down.

A quick build up on the left saw Thein Than run down the left flank and send a perfect cross into the box for Yan Naing Oo to head in to put the home team under early pressure.

India took time to settle down and earned a penalty in the 12th minute when Heaing Bo Bo brought down Chhetri inside the box. Chhetri himself took the penalty and made no mistake in finding the net.

Myanmar showed a lot of urgency in their attack and once again took the lead in the 19th minute when Kyaw Ko Ko sent a stiff grounder that beat a diving Gurpreet to find the corner of the net.

India looked dangerous in their counter attacks and had their chances to restore parity but Sandesh Jhingan shot over the bar off a free kick taken by Eugeneson Lyngdoh in the 39th minute.

Chhetri too had a glorious chance to restore parity in the dying minutes of the first half but his angular shot off a Jeje through pass missed the target narrowly.

The second half was fought on equal terms as both the teams made forays but could not penetrate into the rival box. Chhetri once again saw his header going out from close off a cross from the right.

India continued to control the proceedings and finally restored parity in the 69th minute through Jeje.

Lyngdoh, who orchestrated most of the moves from the middle, sent a high lob for Jeje who chested the ball inside the box and essayed a low shot that beat rival keeper to find the far post.

Towards the end, Chhetri again had a glorious chance to score after he was involved in a one-two pass with Udanta Singh but he shot over the bar.

Comments
Topics mentioned in this article
India Football Team Football
Get the latest Cricket news, check out the India cricket schedule, Cricket live score . Like us on Facebook or follow us on Twitter for more sports updates. You can also download the NDTV Cricket app for Android or iOS.