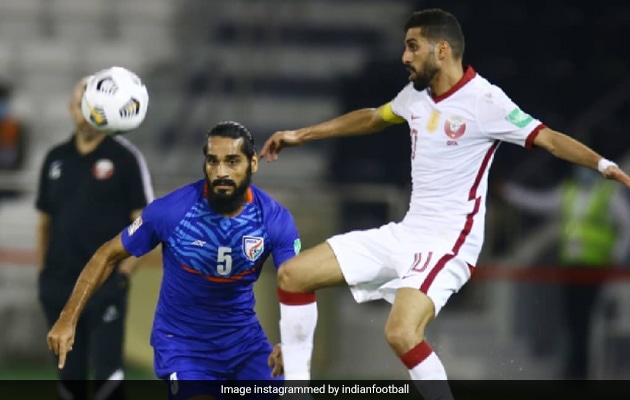 A 10-man India defended creditably well as they suffered a 0-1 defeat to Asian champions Qatar in their World Cup qualifying round match, on Thursday. Abdel Aziz scored in the 33rd minute in a match completely dominated by the Qataris. The two sides played out a goalless draw in their first leg match, in September 2019. Group toppers Qatar, who are yet to lose a match, had waves of attacks with their eight to nine players in the Indian half for most of the time.

Goalkeeper Gurpreet Singh Sandhu had to pull off a series of saves to keep the margin of loss small. India, however, played with 10 men from the 17th minute onwards after defender Rahul Bheke was red-carded after a second booking. He had earlier received a yellow card in the ninth minute.

India did have two good moves in the match from counterattacks with Manvir Singh in the thick of things on both occasions.

India captain Sunil Chhetri, who returned to the team after recovering from COVID-19 infection, was replaced by Udanta Singh at the resumption of the second half.

A winless India remained in fourth spot in Group E with three points from six matches.

Igor Stimac's men are two points behind Afghanistan (third with five points) who played out a 1-1 draw against Bangladesh earlier in the day. India play Bangladesh on June 7 in their next match.

India Sunil Chhetri Gurpreet Singh Football
Get the latest updates on ICC Women's Cricket World Cup 2022 and IPL 2022, check out the Schedule , Live Score and IPL Points Table. Like us on Facebook or follow us on Twitter for more sports updates. You can also download the NDTV Cricket app for Android or iOS.