2022 FIFA World Cup Qualifier: British PM Boris Johnson stated that it was "completely unacceptable" that England players were racially abused during their match against Hungary. 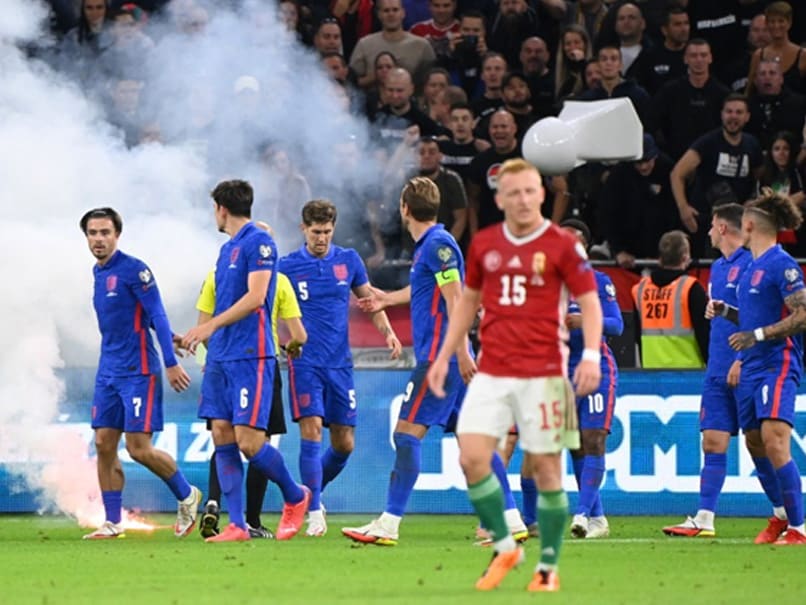 Players react as the Hungary vs England match gets interrupted due to flares.© AFP

He urged FIFA to take "strong action against those responsible to ensure that this kind of disgraceful behaviour is eradicated from the game for good."

England manager Gareth Southgate and several of the team's players said they did not hear the reported abuse.

"I can only go off what you are telling me, and if that is the case then we know it is unacceptable," he told Sky Sports.

"We weren't conscious of it on the side and I don't know whether the players on the pitch were, but I think everyone knows what we have talked about for two or three years," he said.

"They know what we stand for as a team, and we have to hope that we can continue to eradicate racism from not only football but life in general."

Sky Sports showed footage of one fan making a monkey gesture in the stands of the Puskas Arena but said they had seen other individuals also behave similarly.

England's Football Association have asked FIFA to investigate the matter.

FIFA said in a statement that it "strongly rejects any form of racism and violence".

The Hungarian Football Association (MLSZ) were not immediately available for comment.

During the game, Hungarian fans threw plastic cups on the field towards England players and a flare also landed on the field.

He wrote: "England players are complaining about last night's 'hostile atmosphere in Budapest.' The footage below was recorded in Wembley before the European Championship final. You can barely hear the Italian anthem over the whistling England supporters. Did they make similar comments back then???"

Hungary were punished by European soccer governing body UEFA after incidents involving homophobia and racism at Euro 2020 games. They must play their next two UEFA matches behind closed doors. Thursday's game was officially in a FIFA competition and so the ban did not apply.

"As specified by UEFA at the time, this sanction is to be served in UEFA competitions," FIFA said in its statement.

Hungary Football
Get the latest updates on ICC Women's Cricket World Cup 2022 and IPL 2022, check out the Schedule , Live Score and IPL Points Table. Like us on Facebook or follow us on Twitter for more sports updates. You can also download the NDTV Cricket app for Android or iOS.