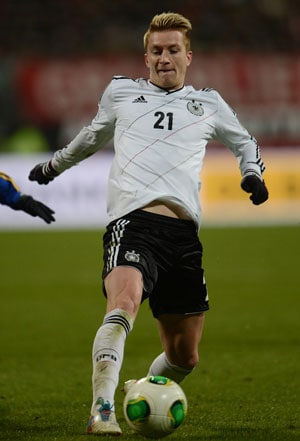 Mario Balotelli scored both goals as Italy defeated Malta 2-0 to move three points clear at the top of their World Cup qualifying group B on Tuesday.

The AC Milan striker opened his account early in the first half from the penalty spot before doubling his tally just before half-time, making it 10 goals in his last nine matches for both club and country.

However, the home side could count themselves a little unlucky as they missed a penalty and also clattered the crossbar in the first half.

With Denmark held to a 1-1 draw in Copenhagen by second-placed Bulgaria, Italy extended their lead at the top of their group and even have a game in hand.

Meanwhile, Malta remain rooted to the bottom of the group with zero points from five matches.

The hosts started reasonably brightly, pressing the Azzurri at every opportunity and not allowing them time to settle on the ball. But it was that eagerness to close down at every moment which was soon to be Malta's undoing.

Luke Dimech overstretched as he tried to tackle Stephan El Shaarawy in the eighth minute and tripped the AC Milan forward in the penalty area.

That gave Balotelli the chance to open the scoring, sending goalkeeper Justin Haber the wrong way from the spot.

However, moments later Malta had a penalty of their own as Andrea Barzagli let Andre Schembri race clear into the box only for Gianluigi Buffon to bring him down.

Michael Mifsud stepped up to take the resulting spot-kick but could not beat the Italian number one.

Thirty-one-year-old Mifsud could have made up for that mistake just a couple of minutes later as he left Leonardo Bonucci for dead, but his long-range shot looped over Buffon and smacked the crossbar, much to the disappointment of the Maltese crowd.

Malta then escaped as Riccardo Montolivo steamed forward and rounded Haber, only to see his shot from a tight angle bounce wide.

The Italians slowly started to exert their authority and Andrea Pirlo saw a freekick blocked by the wall, before Balotelli put another just over the bar.

Malta's reprieve was brief, though.

Almost on the stroke of half-time, Bonucci found Mattia De Sciglio on the left with a superb long ball. The youngster showed excellent control as he advanced towards the goal before his cut-back found Balotelli, who side-footed into the far corner from close range.

Italy could, and should, have added another just after the break when Ignazio Abate raced down the right side into the box, but his cross was poorly controlled by Emanuele Giaccherini who, nevertheless, forced a brilliant reflex save from Haber.

Claudio Marchisio was a little fortunate at the other end when he appeared to trip Mifsud as the striker raced into the penalty area, but the referee waved play on, much to the disgust of the Maltese, who were convinced they should have had another spot kick.

Meanwhile, A three-goal barrage within nine first-half minutes set Germany up for a 4-1 home victory over a resilient Kazakhstan on Tuesday to remain in control of their 2014 World Cup qualifying group.

Germany's Marco Reus hit the opener after 23 minutes, Mario Goetze doubled in the 27th and Ilkay Guendogan make it 3-0 in the 32nd. Reus finished the scoring in the 90th minute for the Germans, who could have scored more but hit the posts or crossbar six times in the match in Nuremberg.

Genrikh Shmidtgal hit one back for the Kazakhs in the 46th minute.

Germany top Group C with 16 points from six matches, followed by Ireland with 10 points from five matches and Sweden with eight points from four qualifiers.

German coach Joachim Loew once again used midfielder Goetze up front in the 4-2-3-1 system as striker Mario Gomez was still unavailable with his thigh injury.

Germany dominated play from the very start but it was Kazakhstan with the first chance as Sergey Ostapenko's header off a corner went just right of the post after eight minutes.

The hosts continued their onslaught with Guendogan hammering his volley against the left post in the 21st minute, and Goetze followed a minute later by finding the left upright.

Germany finally hit the back of the net in the 23rd minute as Reus turned in from the left side and struck home a low shot from 21 yards.

Germany doubled the advantage just four minutes later with captain Philipp Lahm rushing forward and through the left side of the Kazakh defense before crossing at the last second to Goetze, who finished off the attack.

The barrage was continued in the 32nd minute as Guendogan was the beneficiary of Mesut Oezil's cross to the near right post where the Dortmund midfielder hit home for his first goal for Germany.

Guendogan was close to another goal nine minutes later but his attempt went off the upper half of the crossbar.

Kazakhstan increased the pressure on the ball after the break and trimmed the deficit to 3-1 in the 46th minute on a mistake by Germany 'keeper Manuel Neuer, who played a backpass too far away and Shmidtgal raced onto the ball and blasted into the empty goal.

Germany nearly finished the game for good in the 72nd minute only to see Kazakh 'keeper Andrey Sidelnikov save shots by Oezil and Thomas Mueller before Oezil hit the rebound off the left post and Sami Khedira followed seconds later with a shot off the right post.

The ball went off the crossbar four minutes later as Sidelnikov batted Mueller's looping shot off his own framework.

Kazakhstan joined the post party with Valerij Korobkin hitting the outside of the left upright off a set piece in the 79th minute.

Lahm saved another Kazakhstan goal in the 89th minute, stopping Shmidtgal's shot at the line before Reus finalised a counter attack in the 90th minute for his second goal.