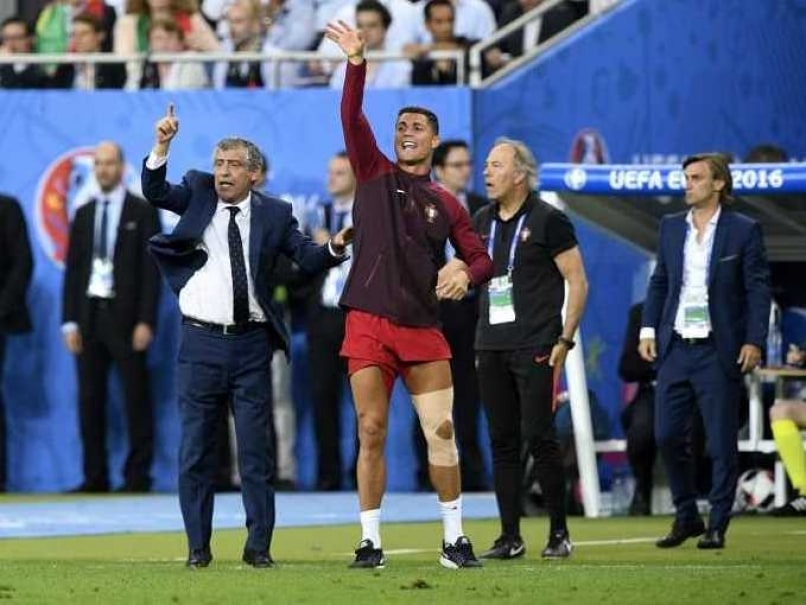 Cristiano Ronaldo passing on instructions to his teammates during the Euro 2016 final vs France.© AFP

These were the words of Kabir Khan, played by Shah Rukh Khan, when he delivered his famous speech to the Indian women's hockey team in the Bollywood blockbuster 'Chak de India'. Kabir Khan's India team went on to upset favourites Australia in a thrilling final of the Women's Hockey World Cup.

During the Euro 2016 final between Portugal and France, an injured Cristiano Ronaldo reportedly channelled his inner Kabir Khan to fire up his teammates, who looked handicapped up front without their best player on the field.

Portugal had started the final as underdogs against the strong France side, but matters were made worse by Ronaldo's knee injury in the early stages, which forced him off the field on a stretcher.

The three-time Ballon d'Or winner's speech, as revealed by teammate Cedric Soares, inspired the players to upstage France in a humdinger of a final at the Stade de France.

"It was a very tough moment (when Ronaldo went off injured). I remember, for me and the team, everybody was a little bit in shock I think," Soares was quoted as saying by ESPN.

"In half-time, Cristiano had fantastic words for us. He gave us a lot of confidence and said 'listen people, I'm sure we will win, so stay together and fight for it.' It was really unbelievable," he added.

Soares also said that Ronaldo had words of encouragement for every player, and it was his fighting attitude that helped the players to continue the battle on the pitch.

As the game progressed, Ronaldo was seen in an animated mode on the touchline, passing instructions and words of encouragement to his teammates. He virtually became the team's assistant manager, and was seen celebrating wildly when Eder scored the deciding goal.

Chandi ko sone me badalne ki koshish kar rahaa hoon, Kabir Khan had told his players in 'Chak de India'. We are not sure if Ronaldo was carrying his Euro 2004 runners-up medal in his pocket, but his speech certainly helped him 'convert' the silver medal from 12 years back to a gold this time.

Comments
Topics mentioned in this article
Football Cristiano Ronaldo Portugal Euro 2016 France
Get the latest updates on ICC T20 Worldcup 2022 and CWG 2022 check out the Schedule, Live Score and Medals Tally. Like us on Facebook or follow us on Twitter for more sports updates. You can also download the NDTV Cricket app for Android or iOS.