Russia's costly Euro 2012 championship continued on Thursday as their federation was fined 30,000 euros for the racist behaviour of some of their fans in the Group A game with the Czech Republic. 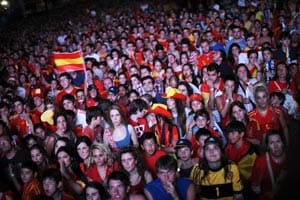 Russia's costly Euro 2012 championship continued on Thursday as their federation was fined 30,000 euros for the racist behaviour of some of their fans in the Group A game with the Czech Republic.

The fine - imposed for racist chants aimed at Czech defender Theodor Gebre Selassie, who is of Ethiopian origin - takes Russia's total fines for the tournament, which they exited at the group stage, to 225,000.

UEFA also imposed a 20,000 euros fine on the Spanish federation for their fans racist chants at Italy's Mario Balotelli during the Group C clash.

Spain has a day to appeal while Russia has three.

Their fines are light in comparison to the Croatian Football Federation.

They were fined 80,000 euros ($100,000, 64,500 pounds) earlier in the tournament after a UEFA-backed racism monitoring group said up to 500 fans racially abused Balotelli during the countries' match on June 14.

An AFP photographer positioned in front of the fans at the match also said he heard the chanting and at one point saw a steward pick up a banana from the pitch.

The size of the fine handed down to Croatia was criticised, as it was less than the 100,000 euros and one-match suspension given to Denmark's Nicklas Bendtner for flouting strict player advertising rules.

Bendtner had flashed the sponsored waistband of his underpants during a goal celebration.

UEFA and its president Michel Platini have repeatedly insisted that they have a "zero tolerance" policy towards racism in European football.

Comments
Topics mentioned in this article
Football Euro 2012 Italy Spain Nicklas Bendtner Mario Balotelli Alou Diarra Lech Poznan
Get the latest updates on India vs Australia Series, check out the India vs Australia Schedule for 2020-21 and Ind vs Aus live score . Like us on Facebook or follow us on Twitter for more sports updates. You can also download the NDTV Cricket app for Android or iOS.