Nicklas Bendtner could face UEFA action for ambush marketing after he scored his second goal in Denmark's 3-2 loss against Portugal. 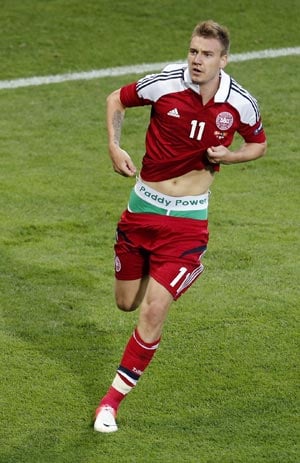 Nicklas Bendtner could face UEFA action for ambush marketing after he scored his second goal in Denmark's 3-2 loss against Portugal.

Bendtner's celebration Wednesday including lifting his shirt and dropping his shorts slightly to reveal a gambling firm's name on his underpants.

Minutes later, the bookmaker sent a Twitter message with a photograph claiming that Bendtner was wearing his lucky underwear.

UEFA regulations for Euro 2012 require that "all kit items worn during the final tournament must be free of any sponsor advertising."

UEFA has sent a member of its marketing department to monitor each match for attempts to circumvent strict rules to protect official sponsors.

Comments
Topics mentioned in this article
Football Alou Diarra Lech Poznan Portugal Nicklas Bendtner Euro 2012 Denmark
Get the latest updates on India vs Australia Series, check out the India vs Australia Schedule for 2020-21 and Ind vs Aus live score . Like us on Facebook or follow us on Twitter for more sports updates. You can also download the NDTV Cricket app for Android or iOS.