Alan Dzagoev was not just the two-goal hero in Russia's opening 4-1 Group A victory over the Czech Republic at the European Championships he also earnt the admiration of a former star player. 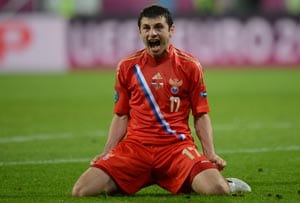 Alan Dzagoev was not just the two-goal hero in Russia's opening 4-1 Group A victory over the Czech Republic at the European Championships he also earnt the admiration of a former star player.

Dzagoev's performance was enough to earn him the vote of man-of-the-match from former Croatia and Real Madrid striker Davor Suker.

And it's that recognition for the talented 21-year-old that particularly pleased his national team coach Dick Advocaat.

"I'm really happy that a player of Suker's quality gave him the man-of-the-match award because he was a really good player and (Dzagoev) can learn a lot from him," said Advocaat.

"Alan played in all our qualification games, he's got a lot of talent.

"He's been training for two and a half weeks since coming back from injury and he's getting fitter day by day.

"It's great because we've got Marat Izlmailov and Aleksandr Kokorin as well challenging for places."

Dzagoev was suffering from a broken toe and had been a doubt for the tournament but now he is back and ready to play a starring role.

"After my injury it was very hard for me to start playing but this time I was able to recover very quickly," he said.

"I had a chance in the game and exploited it and I want to thank the coach for his trust in me."

The Beslan-born and self-confessed Chelsea fan was also delighted with the recognition from Suker.

"I'm thankful for this award because when I was little I really liked the way Suker played," added Dzagoev.

"It's very important that we won the first game, it's one of the six steps to the final."

Dzagoev also showed he has an old head on young shoulders, dismissing any suggestons he would be disappointed at having missed a chance to score a hat-trick.

"That's not important, the main thing is that we won and that we have won really impressively," he said.

Rumoured to be being tracked by Manchester United and Arsenal amongst others, a few displays like this one could see Dzagoev becoming a household name before long.

Comments
Topics mentioned in this article
Alan Dzagoev Football Euro 2012 Alou Diarra Lech Poznan
Get the latest Cricket news, check out the India cricket schedule, Cricket live score . Like us on Facebook or follow us on Twitter for more sports updates. You can also download the NDTV Cricket app for Android or iOS.