Survey shows Poles proud of how they hosted Euro 2012

Their team may have failed to shine on the pitch, but Poles are bursting with pride about how well their country did in hosting Euro 2012, with an overwhelming majority reckoning it was a hands-down success. 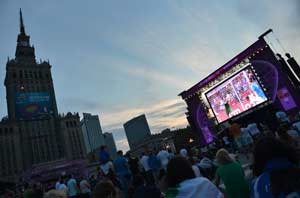 Their team may have failed to shine on the pitch, but Poles are bursting with pride about how well their country did in hosting Euro 2012, with an overwhelming majority reckoning it was a hands-down success.

A total of 94 percent of those polled by the PBS public opinion institute said Poland had done a good job as co-host of the European football championship along with neighbouring Ukraine.

"Euro 2012 was a success. A success for all of us," Sports Minister Joanna Mucha told reporters as she released the poll.

An even-mightier 97 percent said the atmosphere during the 23-day tournament had been good, and 90 percent that they were proud of what their country had achieved.

The survey of representative sample of 1,000 adults was conducted last week, and commissioned by PL.2012, the 16-nation tournament's Polish logistical arm.

Marcin Herra, head of PL.2012, underlined that Poles' attitudes towards the tournament had evolved since Poland and Ukraine won the bidding race back in April 2007.

"Five years ago, not everyone among us was convinced that we'd manage this," he told reporters.

As recently as September 2009, only 49 percent of those surveyed had said Euro 2012 would be a success on the organisational front.

By September 2011, that figure had hit 57 percent, before climbing to 63 percent in March this year and 85 percent just before the tournament kicked off on June 8 in Warsaw.

Euro 2012 marked the first-ever edition of the quadrennial football showcase to take place behind the former Iron Curtain, and Poland and Ukraine were plagued by doubts about their ability to get their infrastructure up to scratch.

But they won plaudits from European football's governing body UEFA, and have been hailed by foreign supporters who came to watch matches in the stadiums and fanzones alike.

A total of 92 percent of the Poles surveyed by PBS said they would like their country to hold another major competition.

The tournament - which ended on Sunday in the Ukrainian capital Kiev with victory in the final for defending champions Spain over Italy - was a sporting disappointment for Poles.

Poland crashed out in the group stage after drawing with Greece and Russia and losing to the Czech Republic.

Comments
Topics mentioned in this article
Football Poland Alou Diarra Lech Poznan Euro 2012
Get the latest updates on ICC Women's Cricket World Cup 2022 and IPL 2022, check out the Schedule , Live Score and IPL Points Table. Like us on Facebook or follow us on Twitter for more sports updates. You can also download the NDTV Cricket app for Android or iOS.