Understanding how to achieve victory is something Lokomotiv Moscow's football coach Slaven Bilic wants to get across to his players. 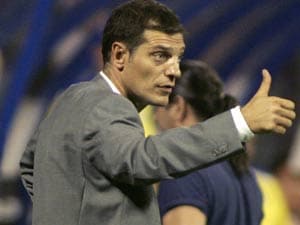 Understanding how to achieve victory is something Lokomotiv Moscow's football coach Slaven Bilic wants to get across to his players.

Lokomotiv suffered a shock 1-0 defeat to FC Kuban after dominating for most of the match, and missed a chance to join Anzhi Makhachkala at the top of the Russian Premier League.

Last week marked the first 100 days of Bilic as Lokomotiv manager, who signed a contract with the Muscovites on May 14, and it was time for the Croatian to ponder the results.

"As the first 100 days of my work with the team have come to an end, I have realised that in many ways we need to move forward," Bilic said.

"I want to change something in the players' psychology to bring to their understanding how to win. Namely, at certain moments you need to do more than usual for a favourable outcome."

Under Bilic's guidance, Lokomotiv have won six, lost three and drawn two games in the league.

It is a considerable improvement over the results of the end of last season, when Jose Couceiro's Lokomotiv lost five and drew three of their final eight games, albeit against only the top sides.

Couceiro, however, started better at Lokomotiv last year, suffering his first Premier League defeat at the hands of Spartak Moscow after nine wins in 12 games.

Comments
Topics mentioned in this article
Football Euro 2012
Get the latest updates on ICC Women's Cricket World Cup 2022 and IPL 2022, check out the Schedule , Live Score and IPL Points Table. Like us on Facebook or follow us on Twitter for more sports updates. You can also download the NDTV Cricket app for Android or iOS.