Britain's Saturday newspapers hailed Danny Welbeck's late strike that handed England a 3-2 victory over Sweden, but sounded a warning about the defending that blew a 1-0 lead. 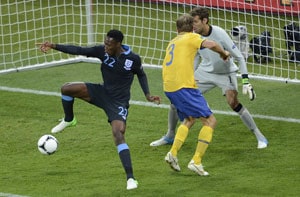 Britain's Saturday newspapers hailed Danny Welbeck's late strike that handed England a 3-2 victory over Sweden, but sounded a warning about the defending that blew a 1-0 lead.

The victory in Kiev -- from 2-1 down -- means Roy Hodgson's team only need a point from their final Group D game against hosts Ukraine to go through to the last eight at the European Championships.

Some newspapers questioned where Wayne Rooney, available again after serving a suspension, might fit in, with forwards Welbeck and Andy Carroll both playing well.

"Welbeck to the rescue to leave Hodgson's men in driving seat", said the Daily Mail.

"Danny Welbeck's sublime finish put England on the path towards the knockout stages in a rollercoaster match at Euro 2012.

"When the dust finally settles, Hodgson will take huge satisfaction from the knowledge both his bold selection moves, picking Carroll and introducing (Theo) Walcott, paid off handsomely.

"Less palatable will be replays of the atrocious defending that forced England to launch their memorable fightback after a half-time lead turned into a deficit."

However, it was "not bad for a team thrown together in one training session by a manager thrown into the job only six weeks earlier".

The Sun came up with the headline "Flick in Kiev".

"England are on a roll now. Or should that be a rollercoaster after last night's nailbiting win over Sweden?" the top-selling tabloid asked in its editorial.

"Never ones to take the easy route, our boys had to come from behind after throwing away a 1-0 lead at half-time.

"But 3-2 was a great result however hard the fight -- and it puts the knockout stages well within reach.

"With Rooney now back in the fray after his suspension, the Three Lions should get the result they need on Tuesday.

"So spare us the pain, Wayne... and reign over the Ukraine."

"That was one of the most entertaining matches of the tournament so far, full of moments of genius and ineptitude in equal measure."

The daily said: "There was a point here when all of England's old failings had resurfaced and the match was straying dangerously close to an almost implausible ordeal.

"What followed was a triumph for England's spirit and togetherness and the qualities of perseverance for which they are renowned."

"Wayne Rooney will be available after his suspension... but who needs Wayne Rooney when you've got Danny Welbeck and Andy Carroll?" it added.

The Independent said: "There was something fragile about this survival. England are hanging on, which is something to say at the end of a night that threatened to go quite horribly wrong."