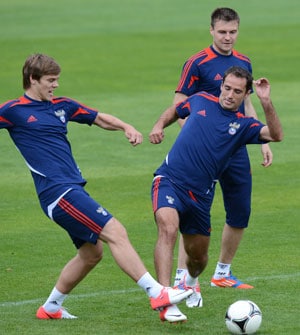 The 21-year-old Dynamo Moscow striker felt pain after taking a shot in training on Thursday and was sent to hospital for a scan.

"Kokorin will definitely miss the match against Greece due to an injury suffered in training. Later today we'll find out the exact diagnosis and recovery period," Kazakov told R-Sport.

Kokorin may be out for between two and three weeks, all but ending his hopes of adding to his substitute appearance against the Czech Republic last week.

Russia coach Dick Advocaat said on Thursday that all other players in the squad were fully fit.

Kokorin is the youngest player in Russia's squad.

He made his debut in November 2011 in a friendly game against Greece after a run of five goals in three games for Russia's under-21 team and has now amassed six caps.

Russia will play against Greece at the National Stadium in Warsaw Saturday, with Poland facing the Czechs in Wroclaw at the same time.

Comments
Topics mentioned in this article
Football Greece Euro 2012 Alou Diarra Lech Poznan Czech Republic Aleksandr Kokorin Dynamo Kiev Anzhi Makhachkala
Get the latest updates on SA vs IND 2021-22, check out the Schedule and Live Score . Like us on Facebook or follow us on Twitter for more sports updates. You can also download the NDTV Cricket app for Android or iOS.