Portugal coach Paulo Bento turned his ire on critics of misfiring captain Cristiano Ronaldo on Saturday, the day before his side's crucial final Euro 2012 Group B match with the Netherlands. 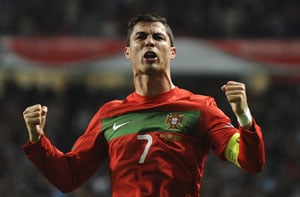 Portugal coach Paulo Bento turned his ire on critics of misfiring captain Cristiano Ronaldo on Saturday, the day before his side's crucial final Euro 2012 Group B match with the Netherlands.

Portugal staked a claim for a quarter-final place with a 3-2 win over Denmark on Wednesday, but Ronaldo was the subject of criticism for squandering two one-on-one chances that would have given his side a 3-1 lead.

The Real Madrid star's profligacy allowed Denmark to equalise through Nicklas Bendtner with 10 minutes remaining, only for Portugal substitute Silvestre Varela to spare his skipper's blushes with an 87th-minute winner.

Having plundered 146 goals in 144 games for Madrid over the past three seasons, Ronaldo has established himself as one of the most prolific goalscorers in the history of the game.

His performances in the colours of his national side rarely hit quite the same heights, but Bento said criticism of the 27-year-old was undeserved.

"It's typical of the mentality of certain people in Portuguese football," he said. "We lose our first match (against Germany) undeservedly and you (the media) focus on the fact that he doesn't score.

"It was the same for the victory against the Danish. I'm particularly annoyed by the two avoidable goals that we conceded, but it's Ronaldo missing two chances that is the focus of all the commentary."

Comments
Topics mentioned in this article
Football Nicklas Bendtner Euro 2012 Mexico Netherlands Canada Belarus France Portugal Alou Diarra Lech Poznan Cristiano Ronaldo Denmark Nani
Get the latest updates on India vs Australia Series, check out the India vs Australia Schedule for 2020-21 and Ind vs Aus live score . Like us on Facebook or follow us on Twitter for more sports updates. You can also download the NDTV Cricket app for Android or iOS.