The statistics do not make pleasant reading for the Netherlands, who must beat Portugal by two goals on Sunday and hope Germany overcome Denmark if they are to reach the Euro 2012 quarter-finals. 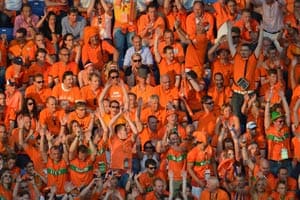 The statistics do not make pleasant reading for the Netherlands, who must beat Portugal by two goals on Sunday and hope Germany overcome Denmark if they are to reach the Euro 2012 quarter-finals.

No team has ever reached the knockout phase at a Euro after losing their first two matches, and statistical website Infostrada Sports estimates that Bert van Marwijk's side stand only a 9.5 percent chance of going through.

The omens are similarly ominous. The last time the Oranje were eliminated at the group phase of the European Championship was in 1980, two years after they finished runners-up at the 1978 World Cup -- just as they did in 2010.

As if the weight of history was not enough of a burden, van Marwijk also appears to face problems with several of his most important players.

Klaas-Jan Huntelaar and Rafael van der Vaart have both expressed anger at being left out of the starting line-up, while Arjen Robben reacted to his substitution in Wednesday's 2-1 loss to Germany by jumping over an advertising hoarding and stalking angrily back to the dug-out.

The top scorers in qualifying, with 37 goals, it took Holland 45 shots to find the net at the Euro but Robin van Persie's 73rd-minute effort against Germany was ultimately in vain.

The Dutch press have deplored van Marwijk's continued faith in van Persie at the expense of Huntelaar, who will hope to be given a start in Kharkiv on Sunday with Holland obliged to attack Portugal from the off.

Wesley Sneijder, at least, is doing his job.

One of the stand-out performers at the last World Cup, the playmaker endured an injury-plagued season with Inter Milan but has created chances at a startling rate of eight per game since the tournament started.

Given the need for goals, van Marwijk could opt to field van der Vaart and Huntelaar in his starting XI, which would oblige van Persie to move to the flanks as he did in the second half against Germany.

Germany's Bastian Schweinsteiger has told his former Bayern Munich team-mate Mark van Bommel that his team will give everything to beat Denmark and van Marwijk knows his side must therefore complete their own mission.

Beaten 1-0 by Germany in their opening game, Portugal let a 2-0 lead slip against Denmark in Lviv on Wednesday before Silvestre Varela's thunderous 87th-minute half-volley rejuvenated their attempts to reach the quarter-finals.

The result means that Portugal will be guaranteed to reach the last eight if they win, unless Denmark beat Germany in the other game, which would invoke a three-way head-to-head comparison between those teams.

The only disappointment for Portugal coach Paulo Bento was yet another mystifyingly poor performance in front of goal from his captain, Cristiano Ronaldo.

The Real Madrid superstar spurned two one-on-one chances to put Portugal 3-1 up and was almost made to pay the price when Nicklas Bendtner equalised for Denmark in the 80th minute.

Bento, however, said he felt Ronaldo had produced "two good matches" and the man himself was typically impervious to the criticism.

"Everyone has the right to miss chances, myself included," he said.

"I would have liked to score -- you know me -- but I gave my all. The goals will come. The team won, and that is what matters."

The last meeting between Portugal and Holland in a major tournament saw the Seleccao prevail 1-0 in a bad-tempered last-16 match at the 2006 World Cup that yielded a record 16 cautions and four red cards.

Given both teams' need for victory, Sunday's encounter threatens to be similarly spicy.