Euro 2012: Hola! Spain invite us into their luxury hotel

Spain threw open the doors of their secluded hideaway in northern Poland to offer fans a tantalising glimpse of just how European and world champions live. 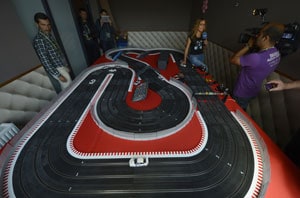 Spain threw open the doors of their secluded hideaway in northern Poland to offer fans a tantalising glimpse of just how European and world champions live.

La Roja generously invited the traveling media to the Mistral Sport, a four-star hotel in the village of Gniewino, 70 kilometres (43.5 miles) from the Baltic port city of Gdansk, where the team gave Ireland a masterclass in football on Thursday.

Jacuzzis, a gym, sauna, swimming pool, chill-out rooms and even a heliport for emergencies are things the highest-paid professionals in the sport can't live without.

But Spain have adapted the picturesque hotel for their very specific needs.

Beyond the white and cream marble-floored entrance hall is an editing room, where backroom staff of the defending European champions and World Cup 2010 winners put together detailed video analysis of their opponents.

Stuck to the wall are the tournament predictions of reserve goalkeeper Pepe Reina of English Premier League side Liverpool, who has forecast that the Euro 2012 final on July 1 in Kiev, Ukraine, will involve France and -- unsurprisingly -- Spain.

Up the sweeping staircase to the 113-room hotel's first floor, Paco Jimenez, who's in charge of watching Spain's opponents, shuffles his files in the office where the technical staff work.

Jimenez could talk all day about tactics and techniques and explains that the file on Spain's final opponents in Group C, Croatia, has been ready for a long time.

"We'll have to watch out for (Luka) Modric, who's a great player, and (Mario) Mandjukic, who's got off to a very good start," he told reporters about the danger men when Spain head up the road again to the 40,000-seater Arena Gdansk on Monday.

Like a musician, Jimenez always has to anticipate. He let slip that he has already started looking at Roy Hodgson's England and Laurent Blanc's France as Spain's possible quarter-final opponents.

Up on the hotel's second floor, there are games rooms with table-tennis and snooker tables as well as easy chairs and the pre-requisite PlayStation.

But Spain's players have also been whiling away the hours in a different way.

Behind one set of doors is a remote-controlled car racing circuit -- a favourite toy for boys big and small -- although, disappointingly for the travelling press, the controls were elsewhere.

Further along is something more typically Spanish -- the "parchis" or boardgame room.

On the other side of the hallway are the players' rooms, each of them with a photograph of the occupant inside on the door.

Team captain Iker Casillas' room and that of Barcelona's Xavi Hernandez are further away from the squad.

Inside, the rooms are spacious without being excessively large: each has a papered feature wall in grey-beige, a kingsize bed and are decorated with photos of sports stars of yesteryear.

At the foot of the hotel is the training pitch. Down a flight of steps, the grass is being cut -- hopefully in the right way, with Spain having complained about the state of the surface in Gdansk after their 1-1 opener with Italy.

Silhouettes of black bulls line the descent, just like at the side of Spanish motorways. On Thursday night's form against the Irish, whom they beat 4-0, the bulls are lining the path to the final. Ole!