Unai Emery's side lost the first two games of the post-Arsene Wenger era against Manchester City and Chelsea. 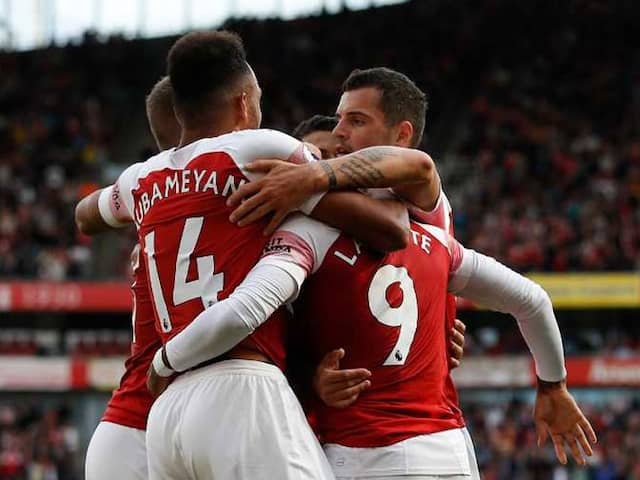 Arsenal came from behind to clinch a 3-1 victory against West Ham.© AFP

Arsenal won for the first time under new manager Unai Emery as they came from behind to clinch a 3-1 victory against West Ham on Saturday. Emery's side had lost the first two games of the post-Arsene Wenger era against Manchester City and Chelsea in the club's worst start to a Premier League campaign since 1992. They were on the verge of more unwanted history after Marko Arnautovic gave West Ham a surprise lead at the Emirates Stadium. A defeat would have made this the first Arsenal side to lose their opening three fixtures for 54 years. But, while Emery's team were dismal in defence, they possessed just enough attacking quality to stage a much-needed fightback.

Nacho Monreal equalised before half-time and West Ham defender Issa Diop deflected influential substitute Alexandre Lacazette's shot after the interval. Danny Welbeck came off the bench to wrap up the points in stoppage-time.

Emery was relieved to see Arsenal finally get points on the board, but their inconsistent performance suggests the former Paris Saint Germain boss still has much to work on as he aims to restore his new club to the top four after last season's sixth place finish.

Pellegrini's side sit bottom of the table and have only themselves to blame after wasting several chances to seize control.

Arsenal were without Mesut Ozil, who was reported to be suffering from the flu after missing training on Friday, but the German midfielder's absence couldn't be blamed for his team's erratic efforts at the back.

There was an early warning for the creaky Arsenal defence as Hammers captain Arnautovic fired into the side-netting.

Pellegrini's men snatched the lead with a 25th minute goal that showed Emery hasn't curled the defensive woes that ailed Arsenal in last years of the Wenger era.

When Felipe Anderson took possession in midfield, he was able to advanced unchecked towards the Arsenal penalty area, where he fed a pass into Arnautovic.

Aided by the lethargic reaction of Arsenal defenders Shkodran Mustafi and Sokratis Papastathopoulos, Arnautovic had time and space to drill a low drive past Petr Cech from the edge of the area.

- Revitalised -
Jolted into action by that shock setback, Arsenal were level within five minutes.

Hector Bellerin's dashes forward from right-back were causing West Ham defender Arthur Masuaku all kinds of problems and the Spaniard was the catalyst for Arsenal's equaliser an the climax of a fine 17-pass move.

Breaking onto Henrikh Mkhitaryan's pass down the right flank, Bellerin whipped over a cross that ran through to Monreal at the far post, where the left-back lashed home from close-range.

Emery admitted this week that Pierre-Emerick Aubameyang has been suffering from a confidence crisis after the Arsenal striker failed to score in the opening two games.

Aubameyang was subdued again, the Gabon international threatening just once from long-range, and when Alexandre Lacazette came on to play alongside at half-time, the French forward immediately looked more dangerous than his team-mate.

Benefitting from more astonishingly slack defending, Robert Snodgrass should have put West Ham ahead when he ran clear on goal, but the midfielder let Arsenal off the hook with a tame effort.

Lacazette's introduction had revitalised Arsenal and he drew a good stop from Lukasz Fabianski with a stinging strike.

Arsenal's pressure was rewarded in the 70th minute when Lacazette controlled well on his chest and swivelled for a shot that cannoned off Diop and into his own net.

Arsenal finished well on top and Welbeck tapped in from Bellerin's pass with the Hammers defence in tatters.

West Ham United Arsene Wenger Nacho Monreal
Get the latest Cricket news, check out the India cricket schedule, Cricket live score . Like us on Facebook or follow us on Twitter for more sports updates. You can also download the NDTV Cricket app for Android or iOS.