Aguero, who turned 30 in the close-season, has now scored 14 times in his last eight Premier League games at City's Etihad Stadium. 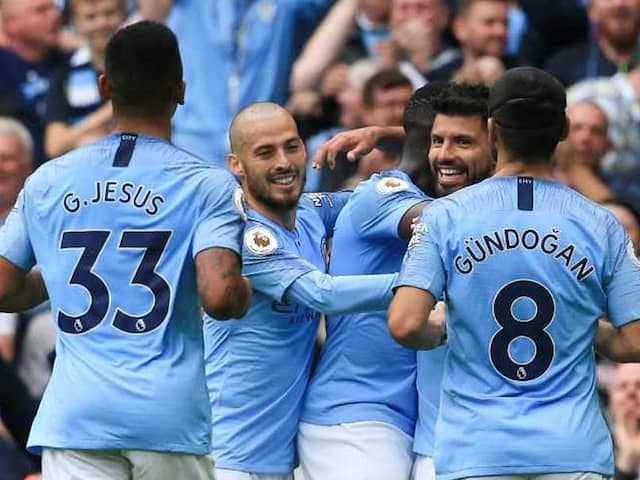 City's rampant display underlined why they are such strong favourites to retain their title.© AFP

Only ex-Newcastle and Blackburn star Alan Shearer has scored more in the competition's history with 11.

City's rampant display underlined why they are such strong favourites to retain their title.

Such is City's strength in depth, Guardiola was able to leave Kyle Walker, Riyad Mahrez and Raheem Sterling on the bench.

And even though City learned this week that playmaker Kevin De Bruyne will be out for up to three months with a knee injury, the fact Guardiola was able to name substitutes which cost his club £230 million ($293 million) in transfer fees, was a sobering thought for their rivals.

After relentless City pressure, which featured Guardiola's team having 80 per cent possession, the champions finally took the lead on 25 minutes, the start of a three-goal blitz inside 10 minutes.

The Argentine skilfully held off his marker, twisting and turning before lobbing the ball over keeper Ben Hamer, who had advanced to the edge of his area, from the edge of the area.

Six minutes later, Benjamin Mendy attacked down the left, exchanging passes with Gabriel Jesus, who enjoyed a fortunate ricochet off a defender before drilling the ball home.

And the rout continued when Hamer fumbled a routine Mendy cross and Aguero pounced, tapping in from six yards.

David Silva had set the tone with a majestic opening half-hour, torturing the Huddersfield defence and allowing the City supporters to forget about the absence of De Bruyne.

But, incredibly, Huddersfield scored from their first attack of the game, three minutes before the interval.

Philip Billing's long throw-in was helped on by Steve Mounie and Jon Gorenc Stankovic responded quickly, forcing the ball in from six yards.

If that gave Guardiola something to ponder at the interval, it required just three minutes of the second half for Silva to restore City's three-goal cushion.

The former Spain international, who this week announced his retirement from his national team, curled a magnificent 25-yard left-foot free-kick into the top right-hand corner of the Huddersfield goal.

Silva, who became the third City player after Joe Hart and Richard Dunne to appear in 250 Premier League games for the club, made way for Mahrez after 64 minutes but there was no let-up for the visitors.

Aguero might have claimed his hat-trick earlier, with a 56th-minute shot that struck the Huddersfield post, while Hamer also turned around his shot around a post after 70 minutes.

Five minutes later, Aguero had his third -- and his 31st league game in which he has scored multiple goals.

The striker met yet another dangerous left-wing cross from Mendy, twisting acrobatically to shoot across his body and into the goal from six yards.

That allowed Guardiola to take off Aguero, replacing him with Leroy Sane who helped wrap up the scoring after 84 minutes with a run and shot which took a fortunate rebound off Terence Kongolo on its way into the net.

Sergio Aguero English Premier League Football Manchester City vs Huddersfield Town, Game week 2
Get the latest updates on IPL 2020, check out the IPL Schedule for 2020 and Indian Premier League (IPL) Cricket live score . Like us on Facebook or follow us on Twitter for more sports updates. You can also download the NDTV Cricket app for Android or iOS.