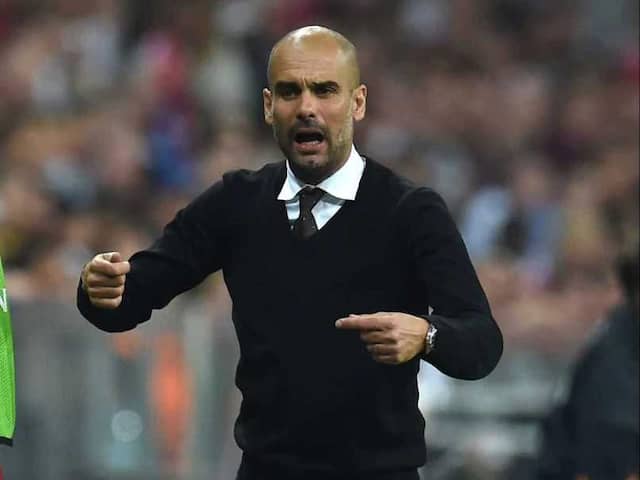 Pep Guardiola had planned on using Douglas Luiz in his first team squad this season.© AFP

Pep Guardiola says he is frustrated by Premier League champions Manchester City's failure to obtain a work permit for Brazilian midfielder Douglas Luiz. Guardiola had planned on using the 20-year-old, signed from Vasco da Gama for 10.7 million pounds (USD 13.6million, 11.9million euros) last summer, in his first team squad this season, providing cover for ageing compatriot Fernandinho. Luiz appeared destined for an important role after City missed out on yet another Brazilian-born player, Italy international Jorginho, who opted to sign for Chelsea instead in July.

But City learned this week their work permit applications had been denied by the Football Association (FA) -- who would support any such request to the Home Office -- with Guardiola particularly upset by the timing of the decision.

"He (Luiz) is not allowed," said Guardiola, who made a point of giving Luiz game time on their recent tour of the United States.

"We are going to try to help him to go on loan again and try to get the work permit.

"It's so difficult for me to understand.

"One guy who doesn't see the player or any training sessions every day has to judge if he has the ability and quality to play.

"I accept the rules but I don't understand because anybody in the world can work wherever he wants.

"The manager from Brazil and myself know more than the guys who decide he is not able to play."

Guardiola, whose biggest investment in the close season transfer market was in Algerian international Riyad Mahrez paying 60million pounds to Leicester City, said he would have preferred greater warning than being told on the day the transfer window came down.

"They didn't know him, not one game, not one training session, to know if he can play or not," he said.

"I would have preferred it if it wasn't announced yesterday.

"If they decide the rules are the rules, let me know 15 days ago and maybe we can decide what we can do but one day before and you decide he can't play because, I don't know, he is not tall enough, doesn't play enough, games in the past or something like that? Okay."

Guardiola, who will have England striker Raheem Sterling and Belgian star Kevin De Bruyne available for Sunday's opener with Arsenal after they returned from their post FIFA World Cup holidays, refused to fall into the trap laid by Liverpool manager Jurgen Klopp earlier on Friday saying City are the clear favourites for the title.

Klopp has spent the most of any manager in the Premier League in the close season and may have been trying to shift some of the huge weight of expectations on his and his team's shoulders.

"But for nine years I've lived with it, no problem.

Liverpool Pep Guardiola English Premier League Football
Get the latest Cricket news, check out the India cricket schedule, Cricket live score . Like us on Facebook or follow us on Twitter for more sports updates. You can also download the NDTV Cricket app for Android or iOS.