Chelsea's second successive win under new boss Maurizio Sarri lifted them to the top of the Premier League with a 100 percent record. 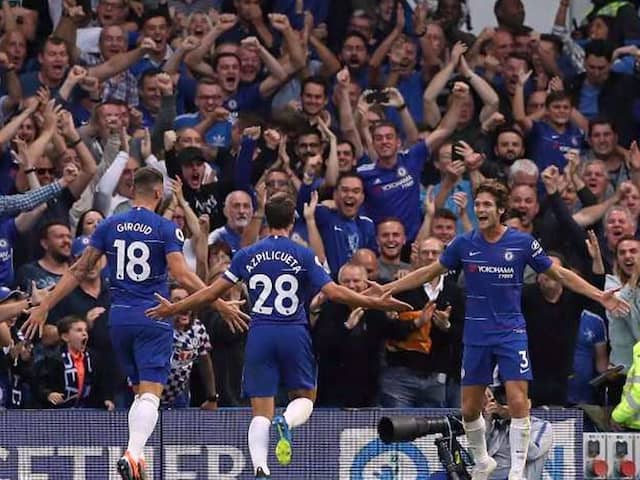 Marcos Alonso scored the winner for Chelsea vs Arsenal at Stamford Bridge.© AFP

Chelsea recovered from the shock of blowing a two-goal lead against Arsenal as Marcos Alonso's late strike sealed a 3-2 win, while Harry Kane ended his August hoodoo in Tottenham's 3-1 victory over Fulham on Saturday. Maurizio Sarri's side raced into a 2-0 lead in the London derby before Arsenal drew level in a thrilling first half at Stamford Bridge. Pedro swept home with a cool finish in the ninth minute after woeful Arsenal defending and Alvaro Morata crashed in the second 11 minutes later. Although Arsenal were rocky at the back, they were dangerous going forward and Henrikh Mkhitaryan got one back with a low strike in the 37th minute.

Alex Iwobi nabbed Arsenal's equaliser with a clinical effort in the 44th minute.

But Chelsea bounced back from that blow, dominating the second half before Spanish defender Alonso finished off substitute Eden Hazard's pass in the 81st minute.

Chelsea's second successive win under new boss Sarri lifted them to the top of the Premier League with a 100 percent record, while Arsenal remain without a point under their new manager Unai Emery after back-to-back losses.

"We did very well for 75 minutes but inside that, 15 minutes were horrible," Sarri said.

"I think the players were really very good because at 2-2 it was not easy with Arsenal."

Emery added: "It is clear the result is not good for us but the process is continuing.

"We had chances to do more... in the first half, I think we need to control the second half better."

Sarri, however, ruled out talk of his side challenging for the Premier League title despite moving top of the table.

The Italian coach believes defensive deficiencies showed Chelsea are far from the finished product capable of challenging favourites Manchester City and Liverpool for the title.

"Not in this moment," said Sarri, who bemoaned a "horrible" final 15 minutes of the first-half that saw Chelsea throw away their advantage.

"I think we have to work, improve in the basics and I'm not talking about only the defenders.

Chelsea beat City to the signing of Jorginho to reunite the Italian international with Sarri after three seasons together at Napoli and he is already becoming key to Sarri's change of system at Stamford Bridge.

A sumptuous Jorginho pass rewarded a positive opening by the hosts as he picked out Alonso and his cross was turned into the bottom corner by Pedro.

Seconds earlier Mesut Ozil had flashed a great chance wide and Arsenal's profligacy was punished again when Pierre-Emerick Aubameyang skied over with the goal at his mercy with the chance to level.

Morata raced onto a long ball over the top and turned inside Shkodran Mustafi before firing home his first goal of the season.

The Armenian made amends to spark Arsenal's fightback eight minutes before the break, though, with a fiercely struck low shot that had too much power for the world's most expensive goalkeeper, Kepa Arrizabalaga.

If Kepa could have been questioned for the first goal he has conceded in English football after an 80 million euro move from Athletic Bilbao, he was helpless as Arsenal equalised four minutes later when Iwobi smashed home Mkhitaryan's cross.

Both sides tightened up after the break, but Sarri had the trump card when he introduced Hazard in the final quarter for a match-winning cameo.

Chelsea's number 10 eased past Hector Bellerin before providing a low cross for Alonso to sweep home 10 minutes from time.

Arsenal Pedro Marcos Alonso Eden Hazard Álvaro Morata Henrikh Mkhitaryan English Premier League Football
Get the latest Cricket news, check out the India cricket schedule, Cricket live score . Like us on Facebook or follow us on Twitter for more sports updates. You can also download the NDTV Cricket app for Android or iOS.