Eden Hazard provided his ninth assist of the season for Pedro Rodriguez to open the scoring and then chalked up his ninth goal of the campaign. 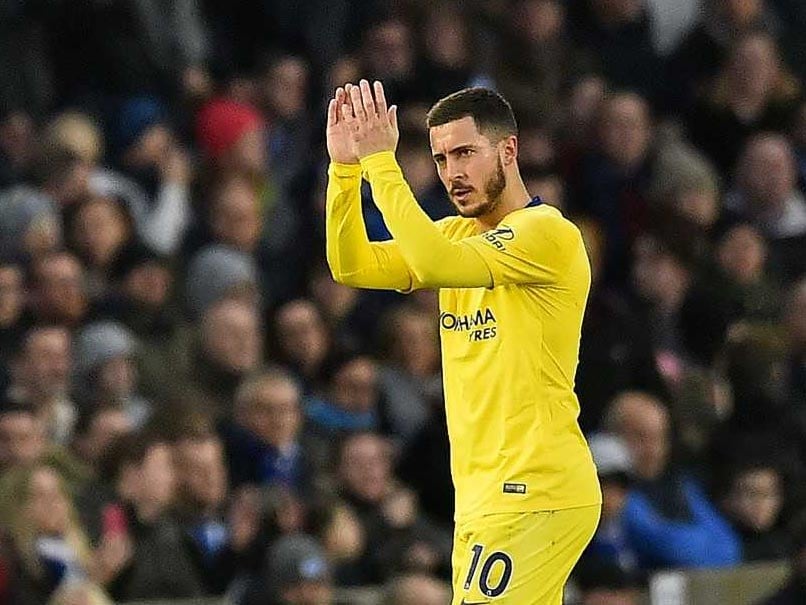 Eden Hazard scored his ninth goal of the campaign.© AFP

Chelsea put a week of negative headlines for the behaviour of their fans behind them on the field thanks to an inspired Eden Hazard in a 2-1 victory at Brighton on Sunday. The Belgian provided his ninth assist of the season for Pedro Rodriguez to open the scoring and then chalked up his ninth goal of the campaign, but first in 13 games for club and country. However, Chelsea failed to build on their 2-0 lead and endured a nervous finale after Solly March pulled one back with his first goal of the campaign.

Victory saw Chelsea open up a three-point lead over Arsenal in fourth and close back to within seven points of leaders Manchester City.

Much of the pre-match speculation centred on the travelling Chelsea supporters and whether there would be any repeat of either the accusations of racist remarks aimed at Manchester City's Raheem Sterling last weekend or the anti-Semitic chanting heard during their Europa League tie against Vidi in Budapest in midweek.

Fortunately there appeared to be no further incidents as the visiting fans enjoyed an excellent start from Maurizio Sarri's side.

Brighton had only previously been beaten at home by Tottenham Hotspur this season.

An early foul on Hazard sent the message that the Seagulls would not show Chelsea as much respect as they had last season, when they stood back and admired Hazard and company in a 4-0 defeat.

It resulted in a free kick that David Luiz thumped through the defensive wall but straight at Australia goalkeeper Maty Ryan.

But Hazard was clearly not in the mood to be intimidated by a kick or two, and he answered in the most effective way possible in the 17th minute.

He tried a shot from 20 yards that was blocked but he was instantly onto the rebound, sped into the penalty area, past Brighton right back Martin Montoya and played the ball across goal for Pedro to steer the ball into the empty net.

Brighton's confidence was visibly dented and they almost disappeared completely as an attacking force, barring a long-range effort from March that Chelsea goalkeeper Kepa trapped with a diving stop.

Chelsea could afford to sit back and pick off their passes, as they did when doubling their lead in the 33rd minute.

Brighton's Nigeria defender Leon Balogun underhit a forward pass that Willian picked off with ease before sending the ball through the Brighton defence and into Hazard's stride. The Belgian collected and slipped it between Ryan and his near post.

A third goal would not have flattered Chelsea's dominance and only the post denied Marcos Alonso just after the hour mark.

But three minutes later, Brighton were, improbably, back in the match.

The previously anonymous Pascal Gross crossed from the right, Brazilian left back Bernardo nodded the ball back across goal, and March hooked it past Kepa from six yards.

Brighton were revitalised and Alonso was lucky not to be sent off for pulling back March as he broke clear on goal.

Brighton & Hove Albion Eden Hazard English Premier League Football Brighton & Hove Albion vs Chelsea, Game week 17
Get the latest updates on IPL Auction 2023 and check out  IPL 2023 and Live Cricket Score. Like us on Facebook or follow us on Twitter for more sports updates. You can also download the NDTV Cricket app for Android or iOS.