Toffees left-back Digne was sent off for a dangerous challenge on Kyle Walker-Peters in the second half, despite his claims he tripped when he stood on the Southampton defender's heel. 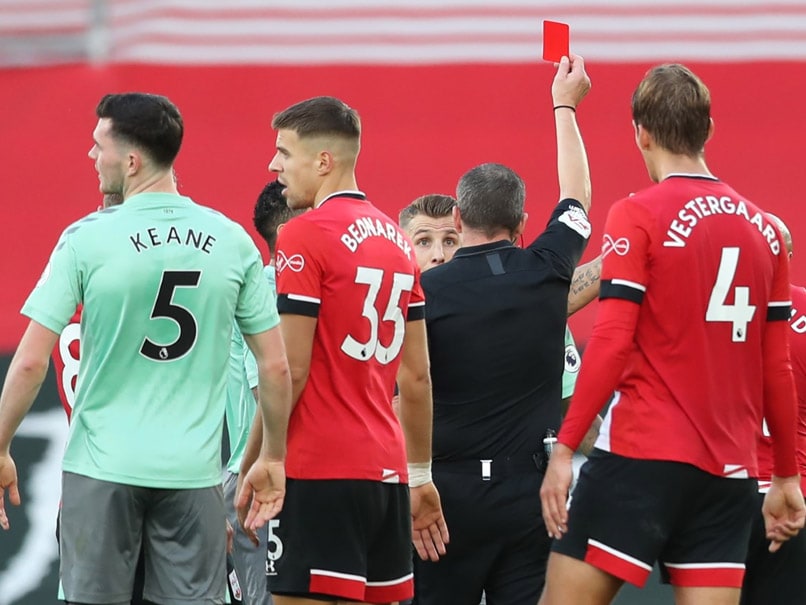 Everton coach Carlo Ancelotti slammed Kevin Friend's "joke" decision to send off Lucas Digne, as the Premier League leaders' unbeaten start to the season ended in a 2-0 defeat against Southampton on Sunday. Everton had gone eight games without defeat in all competitions this term, but they paid the price for a lethargic display at St Mary's. Ancelotti's side fell behind to James Ward-Prowse's first-half goal and Che Adams doubled their lead before the interval. Toffees left-back Digne was sent off for a dangerous challenge on Kyle Walker-Peters in the second half, despite his claims he tripped when he stood on the Southampton defender's heel.

"The red card was a joke, it was not intentional, for sure it was not violent. Maybe it was a yellow," Ancelotti said.

Without the suspended Richarlison and injured Seamus Coleman after last weekend's stormy Merseyside derby draw with Liverpool, Everton lacked the drive and quality that had been the hallmark of their strong start to the campaign.

They remain above the champions and local rivals on goal difference after a result that should serve as a reality check.

"We didn't play well, Southampton were better than us and they deserved to win. It came after a really good run for us, now we have to look forward with the same spirit and belief," Ancelotti said.

"I told the players winter is coming and we will have to react."

Southampton have now only lost twice in 13 league matches and climbed within three points of first place.

An entertaining encounter got off to a fast start when Danny Ings picked out Ryan Bertrand, and his pass found Nathan Redmond for a shot that whistled past the post.

Everton's Gylfi Sigurdsson went close with a blistering 20-yard drive that cannoned off the crossbar.

Jordan Pickford was in action for the first time since his ugly tackle on Virgil van Dijk left the Liverpool defender with a serious knee injury.

Pickford had been subjected to vicious abuse on social media, but Ancelotti refused to take the error-prone keeper out of the spotlight.

Pickford made a good save to deny Oriol Romeu's blast, but the England international had no chance when Ward-Prowse put Southampton ahead in the 27th minute.

Ward-Prowse passed to Ings, who returned the ball to the midfielder, who took one touch before firing into the far corner for his first goal of the season.

Adams doubled Southampton's lead eight minutes later when Ings rampaged past Ben Godfrey and Yerry Mina before lofting a cross to his strike partner, whose shot deflected off Sigurdsson on its way past Pickford.

Everton were marginally better in the second half, but James Rodriguez wasn't having his usual influence.

Their last hope vanished in the 72nd minute when Digne was dismissed for his awkward foul on Walker-Peters.

Lucas Digne Carlo Ancelloti Jordan Pickford Football
Get the latest updates on IPL Auction 2023 and check out  IPL 2023 and Live Cricket Score. Like us on Facebook or follow us on Twitter for more sports updates. You can also download the NDTV Cricket app for Android or iOS.